"Is there a doctor on board?": The six words that no modern-day air or sea traveller wants to hear during their journey!

It was a different story some 400 years ago and luckily for those who boarded the Mayflower in 1620, one of the passengers was...

In preparation for the colonists' trip across the Atlantic, Samuel Fuller knew the ship would not have a doctor so gave himself a crash course in medicine before leaving Leiden in Holland.

It was a decision that no doubt helped save countless lives on the voyage and during the first harsh winter, when terrible weather conditions accounted for more than half of the passengers and crew before they'd even set foot on American soil.

Despite suffering great personal tragedy while the Mayflower was anchored off Cape Cod, Fuller continued to serve as a key member of the group.

His medical knowledge was to prove invaluable in Plymouth Colony, where he served as the doctor and as a church deacon. 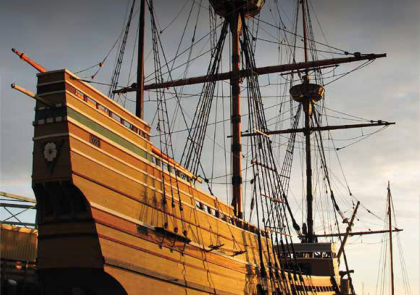 Who was Samuel Fuller?

Samuel Fuller is believed to have been born in around 1580 in Redenhall, Norfolk, to Robert Fuller and Sarah Dunthorne.

He also had a brother, Edward Fuller, who travelled with him on the Mayflower.

Fuller is said to have wed Alice Glascock in around 1605, before marrying his second wife, Agnes Carpenter, in 1613 in Leiden, Holland.

He became a deacon in the Leiden Separatists church and, together with key congregation members Edward Winslow, William Bradford and Isaac Allerton, was part of the group who decided to relocate to America.

Samuel Fuller boarded the Mayflower with his servant, William Butten, leaving his wife, Bridget, behind in Leiden.

Fuller's plan was to wait until the conditions in Plymouth Colony were better suited to families - a decision that undoubtedly saved Bridget's life.

Among the passengers was his brother, Edward, who made the trip with his wife and a son, also named Samuel.

Samuel and Edward Fuller were both among the 41 “true” Pilgrims who signed the Mayflower Compact. Sadly, his brother and sister-in-law both perished during the first harsh winter, after his servant, William Butten, had died en route to America.

Fuller's wife arrived in America three years later on the ship, Anne. During their time in Plymouth Colony, the couple had two children, Mercy and Samuel.

The same year (1623), as part of the Division of Land, Samuel was given two acres of land, while Bridget received her share "in with a corner by the pond".

Along with William Bradford, William Brewster, Edward Winslow, Myles Standish, Isaac Allerton and others, he bought the joint-stock company in 1626.

In 1629 / 1630, Fuller was sent to assist the colonists of Salem and Charlestown who were sick and also needed help in organising their local Church.

A few years later, Fuller himself fell ill with the sickness ("infectious fever") that had quickly spread throughout Plymouth Colony.

A Plymouth resident named Nathaniel Morton wrote in his New England's Memorial some years later: "Among the rest, Mr Samuel Fuller then died, after he had much helped others, and was a comfort to them.

"He was their surgeon and physician, and did much good in his place, being not only useful in his faculty, but otherwise, as he was a godly man, and served Christ in his office of a deacon in the church for many years, and forward to do good in his place, and was much missed after God removed him out of this world."

In the meantime, Fuller had written his Will, describing himself as "sick and weak". He is believed to have died in August or September that year, as his Will was proved in October. His wife, Bridget, passed away many years later in 1667.

Samuel Fuller's burial place is unknown but he has a number of notable descendants - including actor Richard Gere, and famous aviation pioneer Amelia Earhart (from his nephew, Samuel - Edward's son).