The English county of Essex is well-known in the Mayflower story as the birthplace of the ship's captain, Christopher Jones.

Jones lived in Harwich and was married twice in the seaside town where the Mayflower herself is believed to have been built more than four centuries ago.

But did you know Essex was also home to another famous 'Christopher'?

Christopher Martin was himself an influential figure for the Pilgrims and was one of the 41 signatories on the Mayflower Compact that became the first governing document of Plymouth Colony.

He was also initially the Governor of the passengers who boarded the ill-fated Speedwell and later took charge on the Mayflower, until he was replaced by John Carver.

What do we know about Christopher Martin?

The first records of Martin appeared in February 1607 when he married a widow called Mary Prower in Great Burstead. The couple went on to have one child, a son named Nathaniel.

Prower also had a son from her previous marriage, Solomon, who travelled with her and Martin aboard the Mayflower.

Before setting sail across the Atlantic, Martin had been in trouble with church authorities a number of times over the years. He bought passage to Jamestown but did not go.

He also purchased four tickets for the Mayflower, but it is unclear why the couple's son, Nathaniel, did not travel with them.

Together with his wife and step-son, Martin took with him to North America a servant named John Langmore, who was probably a teenager at the time as he did not sign the Compact.

While in Southampton, the Leiden congregation appointed Martin - alongside John Carver and Robert Cushman - to purchase goods and supplies. But when money ran short and Martin was asked to account for his spending, he refused.

Despite that, he was still appointed 'governor' on the Speedwell but when she was deemed unfit to cross the Atlantic, many of the Leiden congregation quit the voyage.

Carver remained Governor of the Mayflower and continued that role when the passengers and crew landed in North America in November 1620. 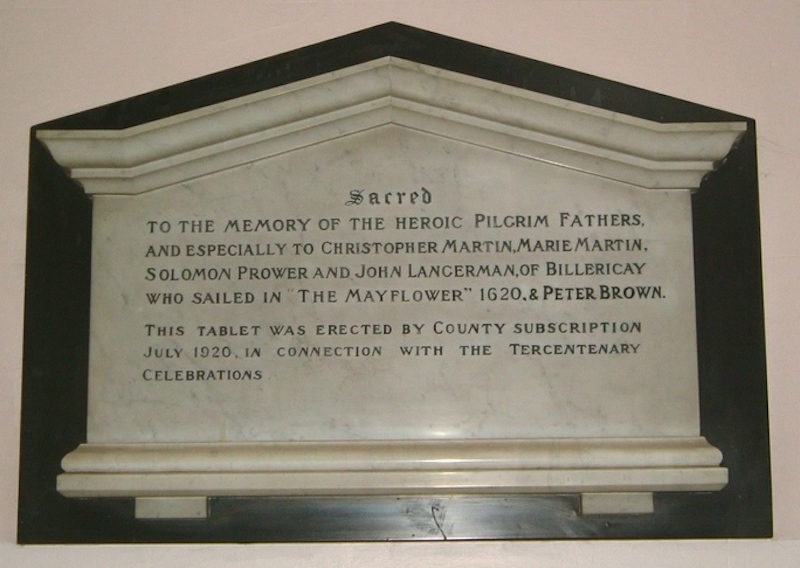 Sadly, Martin and his whole family - including John Langmore - died during the first harsh winter at Plymouth Colony, but his legacy lives on in his home county of Essex.

He even has a plaque dedicated to him and his family at the United Reformed Church in Billericay, which reads:

"To the memory of the heroic Pilgrim Fathers, and especially to Christopher Martin, Marie (sic) Martin, Solomon Prower and John Langerman (sic) of Billericay who sailed in 'The Mayflower' 1620. & Peter Brown.

"This tablet was erected by county subscription July 1920 in connection with the Tercentenary celebrations."