He was the man who captained the Mayflower and without him the Pilgrims would not have made it across the Atlantic and the fierce storms that brutalised them.

But who was Captain Christopher Jones, where did he come from and how did he come to play such a vital role in the Mayflower story?

Jones is believed to have been born in the seaside town of Harwich in 1570, and was the son of Christopher Jones Senior, who was also a mariner and ship owner. He lived in Harwich and was married twice in the Essex port - where the Mayflower was built.

Visitors tracing the history of the Mayflower to Harwich will soon be able to take a look inside the home of the man who mastered and captained the Mayflower ship on that pioneering journey in 1620.

Visitors to the historic town in Essex will be able to experience home life as it was back in the 1600s when the Captain’s home is opened as a tourist attraction for the 400th anniversary - subject to reaching an agreement with its owner. 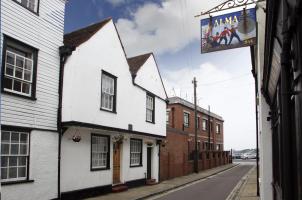 The house in Harwich

The house is being converted into a museum in time for the 2020 commemorations and a large part of it will be restored to its original features to give visitors a real taste of what it would have been like to live there.

Jones married Sara Twitt at St Nicholas Church in Harwich in December 1593 when she was 17. They were neighbours, living across the road from each other on Kings Head Street - both homes still exist and are now visitor attractions.

Sara’s father Thomas Twitt was wealthy and had strong shipping interests. When he died he left a 1/12 share in his ship Apollo and considerable money. Both Christopher and Sara’s families combined their shipping interests. Within a year of marriage, the couple had a son named Thomas after her father but records show he died in 1596. Sara had no more children and died at the age of 27 in 1603.

A few months after Sara’s death, Jones married his second wife, widow Josian Gray when she was 19. Josian had seafaring relatives and her late husband Richard Gray was a noted mariner with friends among the Captains of the 1588 Armada Fleet. In his mid-30s Jones was considered to be a prominent citizen of Harwich. In 1601 he was one of 77 men who took the oath as freeman of the Borough of Harwich, and in 1604 was named as a burgess of Harwich in a new town charter granted by King James. With help from a bounty, he built a 240-ton, larger than average ship of his own and named it after his second wife Josain. He then used it for trading voyages.

In August 1609 records show Jones as master and part owner of the Mayflower when his ship was chartered for a voyage from London to Norway and back.

It was in 1611 that Jones moved to Rotherhithe on the Southbank of the River Thames in London and by this time he had likely traded the ship Josian for a quarter share in the Mayflower. Rotherhithe was his home until his death in 1622. Over the coming years Jones worked in the wine trade, using the Mayflower to bring wine back from France, Spain, Portugal, and the Canaries, and in the summer of 1620 he and his ship were chartered to undertake the Pilgrim voyage across the Atlantic.

In the middle of July 1620 the Mayflower, with about 65 passengers on board left Rotherhithe en route to Southampton to meet the ship Speedwell, bringing the Separatists from Leiden in Holland.

It was planned that both ships would sail across the Atlantic together, but bad weather and problems with Speedwell that could not be fixed, meant the Mayflower was to sail alone with both ships’ passengers. Some abandoned their journey and stayed in England, but the remaining 102 passengers left the Mayflower Steps in Plymouth on September 6, 1620 and endured 66 days of fighting gales to cross the Atlantic, finally reaching the New World on November 11.

Jones and his ship remained in Plymouth Harbor, America through the winter of 1620-1621 during which almost half the passengers died of a mixture of contagious diseases, which also hit some of Jones’ crew.

At the start of April 1621, Jones and his crew left America, and sailed back to England, arriving in their home port of Rotherhithe on May 5, 1621. He returned to his trading voyages, but his health had been badly affected by the trans-Atlantic journeys. He died in early March 1622 and was buried at St Mary’s Church in Rotherhithe. A statue in the grounds of the church commemorates his role in the Mayflower story. It is represented in the guise of St Christopher, patron saint of travellers, holding a child. The adult is looking back towards the Old World and the child is looking towards the New World. The statue is by Jamie Sargeant and was unveiled in 1995 to mark the 375th anniversary of the voyage of the Mayflower.

The plinth is in the form of a stylised boat, with sharp prow and rounded stern. Around the plinth is written: “To the memory of Christopher Jones 1570 - 1622, Master of the Mayflower. He landed 102 planters and adventurers at Plymouth Massachusetts 21 Dec 1620. They formed the Mayflower Compact & the first permanent colony in New England.”