It is one of the most well known dates in history - on 16 September 1620, a group of men, women and children departed Plymouth aboard the Mayflower for a new life in America.

But for many of its influential passengers the historic voyage actually began several weeks before - on July 22, 1620, from a port in Holland.

In a moving ceremony on that day, many of the Pilgrims boarded a ship known as the Speedwell in Delfshaven harbour, meeting up with the Mayflower in Southampton. Had the Speedwell been seaworthy, both ships would have attempted the Atlantic crossing and the Pilgrims would probably never have set foot in Plymouth.

This part of the Mayflower story begins roughly previous 12 years before that date, in an eventful and often daring journey before they even left English shores.

A large number of the people who boarded the Mayflower were known as Separatists from towns and villages in an area of Nottinghamshire, Yorkshire and Lincolnshire in England.

They had broken away from Henry VIII’s new Church of England, becoming known as Separatists - but they faced prosecution for not following the King's church.

A Separatist congregation in Gainsborough, led by preacher John Smyth, decided to leave England for Holland in pursuit of religious freedom. They first attempted to escape the country in 1607 from Boston in Lincolnshire but the captain of the ship they had charted to smuggle them out of the country betrayed them and they were arrested.

Some of them were tried and held at Boston Guildhall for a month but they attempted the escape again the following year - this time successfully.

They fled from the port of Immingham in England, sailing to Holland where they settled in the city of Leiden. 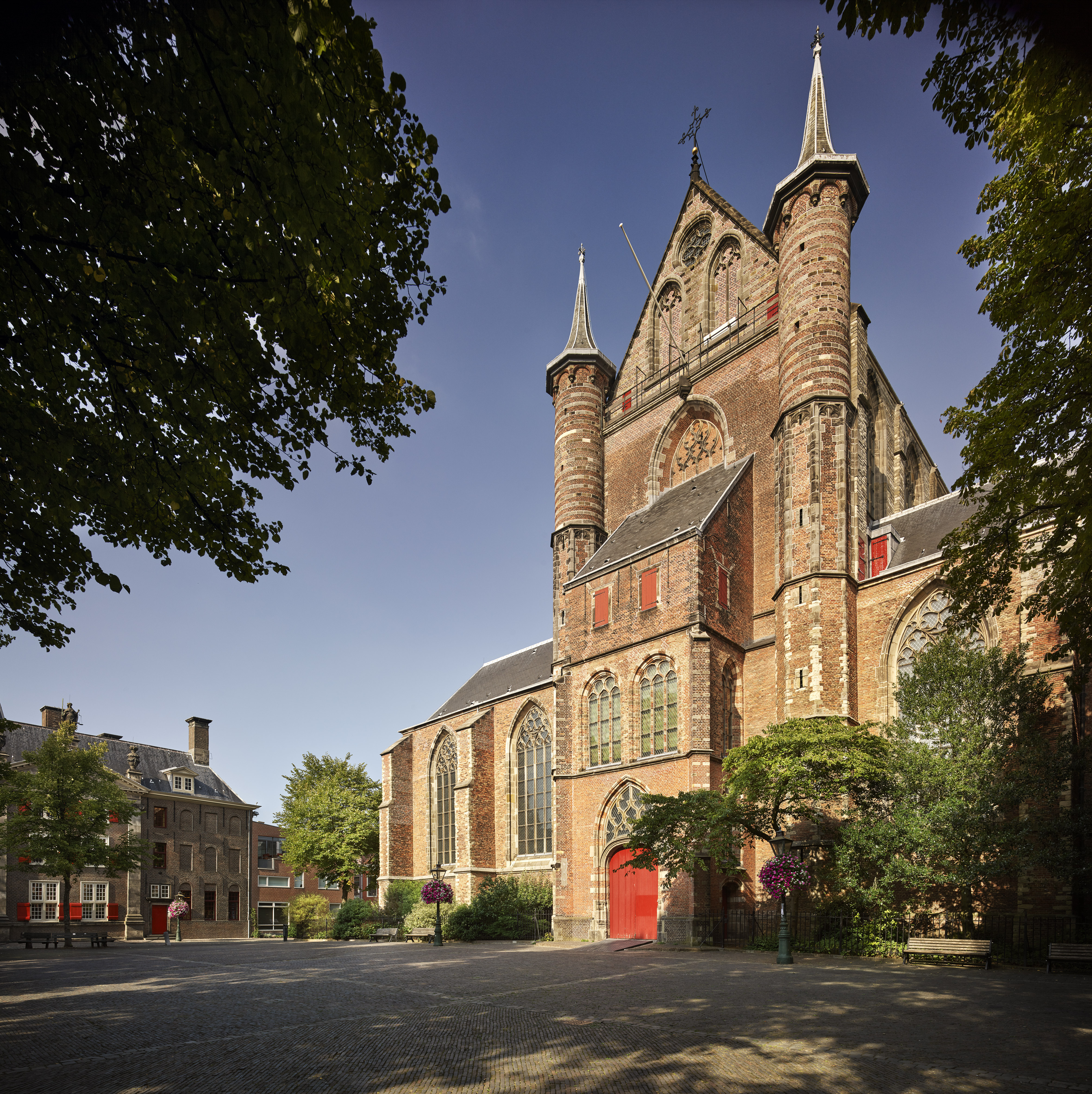 Leiden, known for being a liberal city of free thinkers, was home to the Separatists for 12 years.

They set about creating new lives for themselves, bought land near the Pieterskerk church and built houses that became known as the Engelse poort - which means English Alley.

John Robinson, one of the founders of the Separatist movement in England, became ‘pastor to the Pilgrims’ during his time in Leiden. He was one of the leaders in planning the journey to America on the Mayflower.

He was to accompany a second wave of Pilgrims to America, but he never made it to the New World, dying before the journey. He was buried at St Pieterskirk Church in Leiden where a plaque is situated. 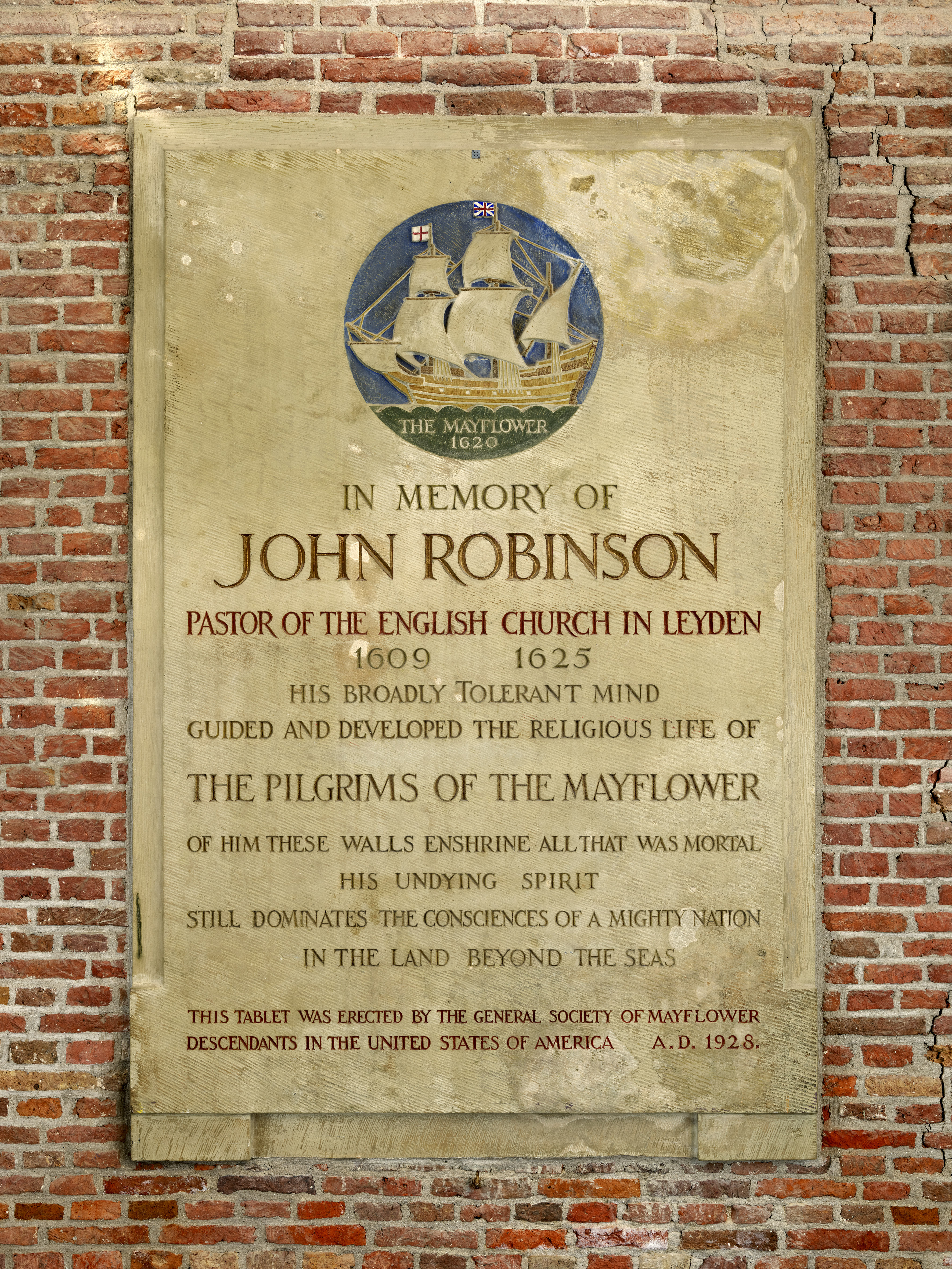 The plaque at the church

Also remembered in Leiden is one of John Robinson’s assistants and elders, William Brewster, who had come from England during the 1608 escape. He had lived and worked in an area of Leiden near Pieterskirk before he became one of the Pilgrim leaders.

He was a passenger on the Mayflower and settled in Plymouth, Massachusetts. The people of Leiden commemorated him by naming the street where he lived after him - William Brewstersteeg (Alley). Brewster’s house has nearly disappeared through development but the blank end wall can still be identified by the contrast of its bricks with those added later. 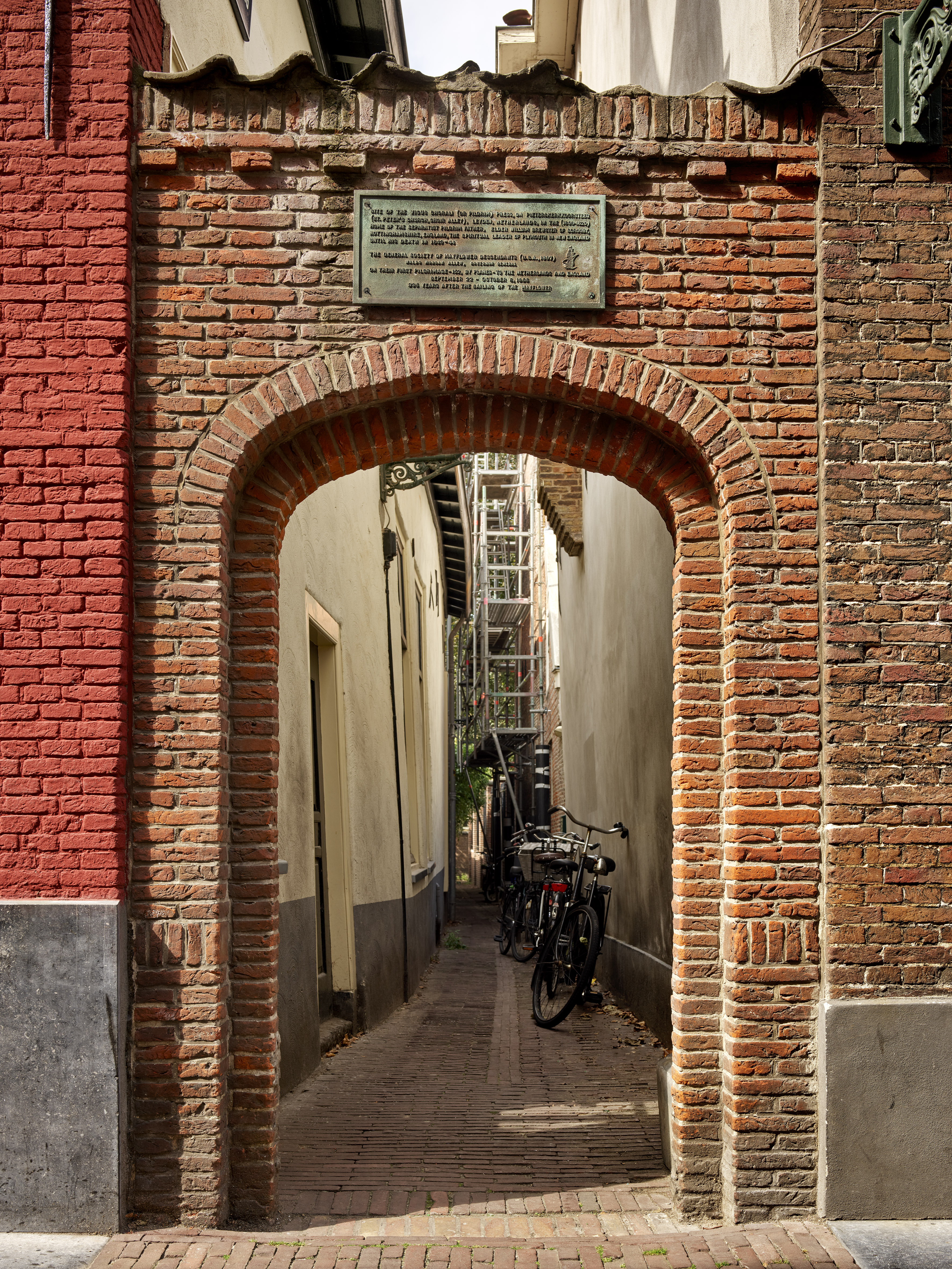 During the 12 years they were in Leiden, the Separatists found life hard. They earned little money and were not used to the urban location - having come from rural English villages. Parents started worrying that their children were being heavily influenced by the Dutch and would eventually forget their English roots.

They were also worried a war between Holland and Spain was imminent and that this would mean danger for the freedom they had fled for.

They decided to move on again, so were in touch with their Separatist counterparts back in England to forge a plan to all travel together to Virginia, America and start a new community there, where they could live and worship as they wanted. To help fund the expensive trip, they made an agreement with the Virginia Company in London - created to establish colonies on the coast of North America which needed people to settle in them and send back goods for trade.

It was another Separatist John Carver who had a key role in planning the journey. He and fellow Pilgrim Robert Cushman were successful in negotiating with the Virginia Company for land in America where they could legally land and settle. William Brewster also knew a prominent member of the company to negotiate with too.

John Carver also won the key financial backing that was to pay for the trans-Atlantic voyage. He approached businessman Thomas Weston in London and the Merchant Adventurers in 1620 and convinced them that if they funded the journey, they would see a return on their investment. Thomas Weston agreed and hired the Mayflower which sailed from London to Southampton to meet the Speedwell, the ship which brought the Pilgrims from Leiden. 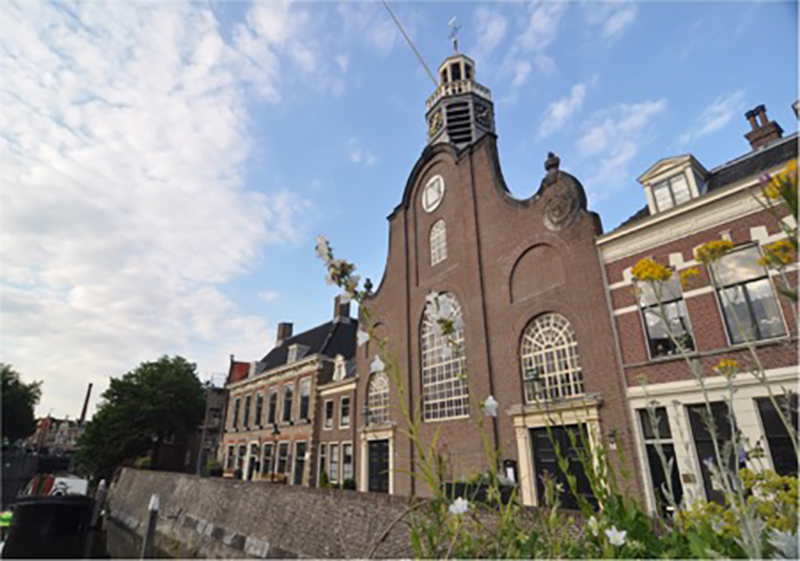 The Separatists in Holland had sold their personal belongings to buy the Speedwell. After one last joint meal and service in the house of Rev John Robinson, 16 men, 11 women and 19 children made the journey from Leiden to Delfshaven near Rotterdam to set sail to Southampton on July 22, 1620.

They travelled on foot, on horseback and by carriage carrying their possessions, ready to board the Speedwell ship, meet the Mayflower, and sail onto a new life in America.

The night before the Pilgrims departed was spent praying in front of the church, now known as the Pilgrim Fathers Church. Today there is a stained glass window depicting the historic moment the Pilgrims set off, and a bronze plaque of the Boston Congregational Club from 1906 praising the hospitality offered by the church to the pioneers.

The following morning residents of Delfshaven and friends of the Pilgrims gathered to see them leave. John Robinson led prayers and after an emotional goodbye, the Speedwell set a course along the River Maas out to the North Sea and en route to Southampton.

A few days later the Speedwell arrived in Southampton and met up with the Mayflower which had sailed from Rotherhithe in London carrying the other Separatists from England. The plan was to stock up in Southampton and sail to America together.

The town was a thriving seaport so as well as offering all the commercial facilities needed to equip the long sea voyage, it also had established trading links with Virginia and Newfoundland. Living there was a group of seamen who had experience of the Atlantic crossing which proved helpful.

The Speedwell had been leaking during her journey from Holland, so was repaired in Southampton’s extensive ship building and repair facilities near West Quay.

Southampton proved the right choice, not least for its offering of all the supplies required for the journey and to establish a permanent community in America. The Speedwell and Mayflower were anchored just off West Quay, and the Pilgrims spent all day shopping for supplies, before sleeping on the ships at night.

And they were certainly in the right place - of the 153 merchants in the town in 1620, 118 were involved in the wool trade, but the remainder would have been able to help the Pilgrims with all the other items they would have needed to become self-sufficient.

A Hampshire man called Stephen Hopkins joined the Mayflower in Southampton, and is known as the only passenger to have had any experience of the New World, having been shipwrecked in Bermuda in 1609.

After a hectic few days of repairs and preparations, both the Mayflower and Speedwell left Southampton on August 15, 1620. But the Speedwell took on water again - thought to be either because she carried too much sail, straining her timbers, or the result of sabotage by the reluctant crew.

Both ships were diverted to Dartmouth, and over the course of a week the Speedwell was repaired. They set sail out into the English Channel towards the North Atlantic, but 300 miles off Land’s End the Speedwell leaked again and it’s decided they cannot risk continuing.

They turned around and headed for Plymouth, having already spent up to six weeks at sea since originally departing London and Leiden. The Speedwell was finally declared unfit to sail, and after some Pilgrims dropped out and stayed in Plymouth, the remainder boarded the Mayflower for the voyage.

On September 16, 1620, the Mayflower with 102 passengers and up to 30 crew onboard, left the Mayflower Steps on Plymouth’s Barbican. This was the last time the Pilgrims were on English soil before heading to the New World and a new life.