When the Mayflower passengers arrived on the shores of North America, it is said that they formed an historic peace treaty with the Wampanoag chief Ousamequin which, albeit briefly, allowed the two groups to coexist in their shared lands.

The Wampanoag went on to teach their visitors how to hunt, plant crops and how to get the best of their harvest, saving these people, who would go on to be known as the Pilgrims, from starvation.

However, over the years the colonies continued to expand into Wampanoag land, and relations soured – which came to a head following the death of Ousamequin some 40 years after the Mayflower had landed.

What happened next is still considered by many to be the deadliest war in American history, leading to the deaths of thousands of people.

This is the story of King Philip’s War…

How did King Philip’s War start?

Following the death of Ousamequin in 1662, his son and heir, Metacom – who was known as King Philip by the English – believed the alliance forged by his father was no longer being honoured by the colonists.

At the same time, the colonies were expanding into Wampanoag land all the time, and relations soured between the two groups.

The colonists demanded the peace agreement should mean the Wampanoag hand over any guns and hanged three of the tribe for the murder in 1675 of Christian native John Sassamon, who had told the Plymouth Colony of a plan to attack English settlements.

Metacom refused and led an uprising of the Wampanoag, Nipmuck, Pocumtuck and Narragansett tribes.

What impact did King Philip’s War have on America?

The united tribes came up against the biggest army the colonial leaders could muster, that fought in coalition with other tribes.

The war is seen as a final attempt to drive out the colonists  and is considered the deadliest war American has ever seen.

The colonist army burned villages as they went, killing women and children.

The war decimated the Narragansett, Wampanoag and many smaller tribes, paving the way for additional English settlements.

Thousands were killed, wounded or captured and sold into slavery or indentured servitude. Decades after the Wampanoag helped the English survive in their lands, they were now enslaved by those very people.

How did King Philip’s War end? 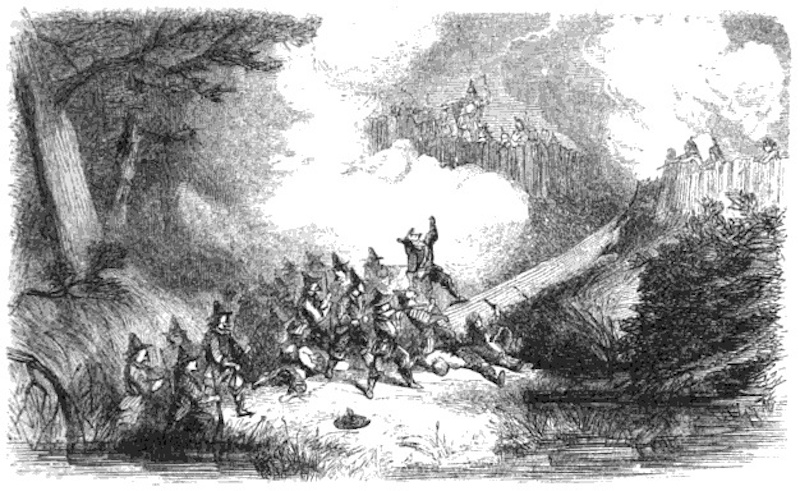 After 14 months of horrific fighting, the Narragansett were finally defeated in 1676 and their chief was killed, while the Wampanoag and the other tribes were gradually subdued by the colonist army.

After his wife and son were captured, Metacom fled to his secret headquarters at Mount Hope in Rhode Island, where he was killed in August 1676.

He was hanged, beheaded, drawn and quartered, with his head placed on a spike and displayed at Plymouth Colony for two decades.