Native America and the Mayflower

Uncovering the histories and cultures of indigenous peoples of North America is no easy task. Native American cultures were oral cultures, meaning their languages and histories survived in a spoken rather than a written form. Therefore, access to information about Native societies pre-contact, that is before Europeans began to colonise both North and South America, is often difficult to uncover. The Wampanoag, the people native to the region where the Plymouth colony was established, are no different, so it’s important to read the documents from the period carefully, and be aware that the descriptions of indigenous people in colonial texts harbour all kinds of assumptions and expectations from the coloniser’s point of view.

Indeed, much of what we know about individuals, such as Tisquantum, or Squanto as he’s more commonly called (although both names may well be nicknames rather than a given name at birth), relies on the narratives of English travellers and writers. John Smith’s narratives reveal that Squanto, from the Patuxet (a tribe located in the area that became the Plymouth colony), along with several others, was abducted by an English trader and sold into slavery in Spain:

But one Thomas Hunt the Master of this ship (when I was gone) thinking to prevent that intent I had to make there a Plantation, thereby to keep this abounding Country still in obscurity, that only he and some few Merchants more might enjoy wholly the benefit of the Trade, and profit of this Country, betrayed four and twenty of those poor Savages aboard his ship, and most dishonestly and inhumanely for their kind usage of me and all our men, carried them with him to Maligo (Malaga), and there for a little private gain sold those silly Savages for Rials of eight…. (John Smith The Generall Historie of Virginia, New-England, and the Summer Isles (London 1624), p. 204-5) [language standardised ]

Another colonial historian also wrote about this episode:

When the said Smith returned for England, he left one Thomas Hunt master of the bigger vessel, with order to sail directly, with the fish he made upon the coast, for Malaga, but he, like a wicked varlet, having gotten twenty-four of the natives aboard his ship, from Patuxit, (who, in confidence of his honesty, had thus innocently put themselves into his hands,) clapped them under hatches, with intent to sell them for slaves amongst the Spaniards ; but they not permitting him to make sale of the poor wretches in any of their ports, some of them found means to escape back to their own country… (William Hubbard, General History of New England, 38-9)

By the time the Mayflower arrived in Plymouth, Squanto had returned to North America (although the details of his return are not complete) and he became an interpreter for the new colony, establishing himself as an intermediary figure, helping the colonisers navigate the geo-politics of the region. Squanto is one of several native translators, intermediaries and diplomats of colonial New England who assisted settlers in basics skills of survival, growing corn for example, as well as assisting in the negotiation of diplomatic alliances between colonial and native groups. It is worth remembering that Squanto could speak at least two languages and had crossed the Atlantic more times than the majority of the Plymouth settlers.

The language of civilisation

When William Bradford uses the terminology of ‘wild’ or ‘savage’ to describe the people of North America – ‘what could they see but a hideous & desolate wilderness, full of wild beastes & wild men? And what multituds there might be of them they knew not (sic) (p. 60) – he is adopting terminology borrowed from many published accounts of North American travellers and explorers from the sixteenth and seventeenth centuries. We can note from this short quote the perceived superiority of western and Christian civilisations, an unsurprising ideological position for a European and a Puritan to adopt. Indeed, one of the key reasons given for the existence of the colony, and for the later Puritan colony of Massachusetts Bay (which would eventually eclipse the Plymouth colony in size and influence), was to convert Native Americans to Christianity. Early settlers and travellers to North America, and the settlers of the Plymouth colony are no different, assumed that Native people were a ‘pre-civil’ people, much like the pre-civil societies of ancient Britain, and they believed that with religious and educational instruction from Europeans their societies might develop as the English had from their ancient ancestors.

In 1588 Thomas Harriot published his popular pamphlet, A Briefe and True Report of the New Found Land of Virginia, where he makes the connection between the ancient Britons and Native Americans explicit. Native Americans were characterised as a primitive people awaiting civilisation. In contrast, however, the inter-tribal politics and trading arrangements between different tribes which are evidenced in colonial texts through the settlers’ interventions in these arrangements, speaks to a network of indigenous social systems from the sixteenth and seventeenth centuries that historians are still unravelling and uncovering today. (See Matthew Cohen, The Networked Wilderness: Communicating in Early New England (Minneapolis: The University of Minnesota Press, 2009)) 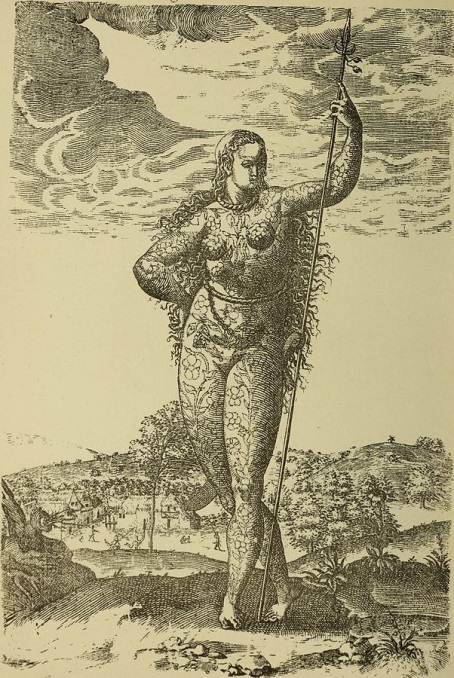 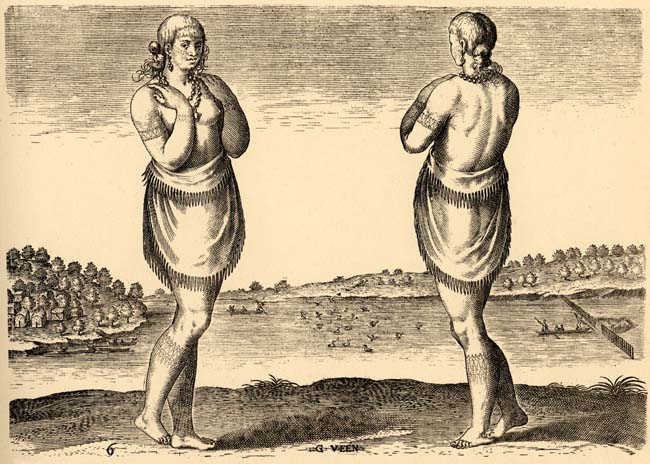 By and large, the written trace of tribal creation stories and religious practices didn’t occur until the latter part of the nineteenth century and early twentieth century, when ethnographers visited tribal societies across America recording traditional narratives in an effort to preserve what they considered to be in the cultures of a dying race of people. But even these accounts have their limitations. 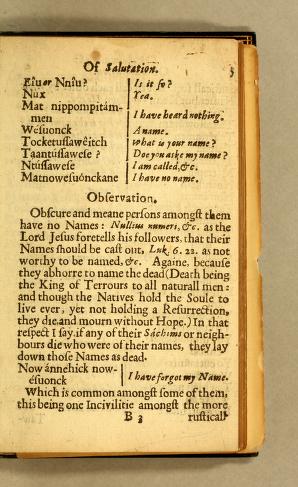 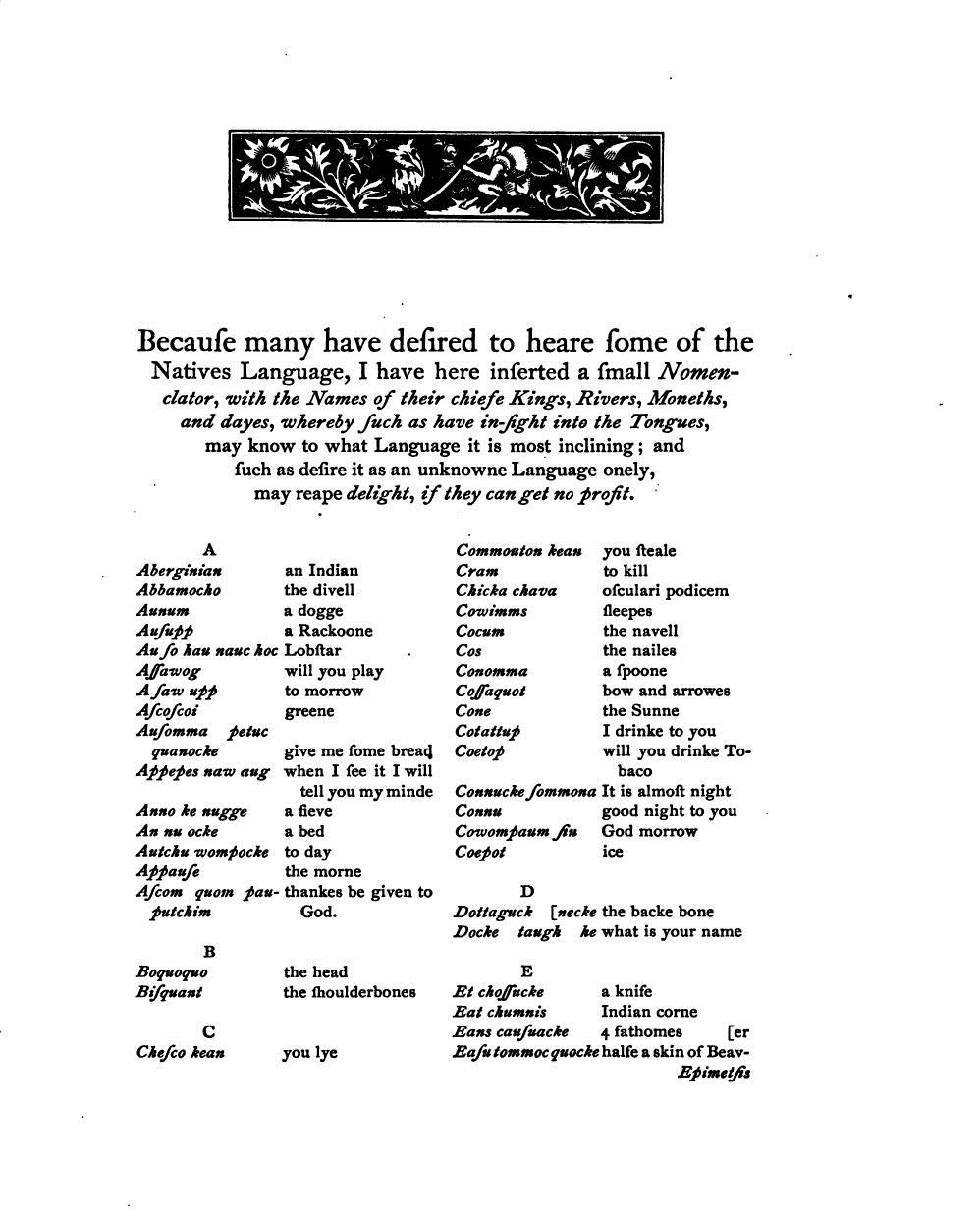 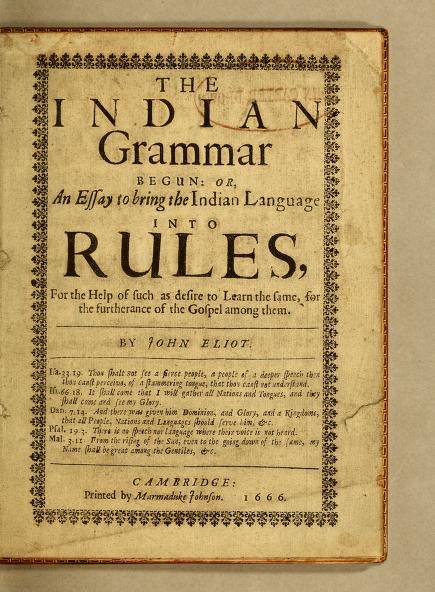 The written traces of native dialects and languages were developed by indigenous translators alongside colonial settlers. Williams and Wood wrote their language texts largely for English audiences, whereas John Eliot composed his language primer and grammar to further the colonial-missionary endeavour.

It is necessary to read colonial texts, from William Bradford, Edward Winslow, John Winthrop, Cotton Mather and others, with a sense of the ideologies that shaped their thinking. While they try to record what they see in dairies, letters and other narratives as accurately as they can, they cannot always offer an explanation as to the purpose or meaning behind Native actions or reactions to colonial interventions. Regardless of these limitations, we know that some Native societies were matrilineal and some were patrilineal, we know that marriage was often used to sustain inter-tribal alliances, and we also know that colonial settlers of Virginia and New England became embroiled, perhaps unwittingly, in pre-existing diplomatic alliances and conflicts.

The wilderness and the unpeopled land

When Bradford and others began to explore the ‘wilderness’ they so longed for, they found graves, and lots of them. This discovery was symptomatic of the impact European diseases had across this Eastern seaboard in the sixteenth and seventeenth centuries. Indeed, when Squanto returns home a few years after his kidnap, he finds that the Patuxet, the band of the Wampanoag to whom he belonged, had died, probably of a plague in 1616-17. And yet, there were still many Native villages trading and interacting all around the Eastern seaboard when the Mayflower arrived; this was not an unpeopled wilderness. (See ‘The Patuxet (Wampanoag)’, Plimouth Plantation) 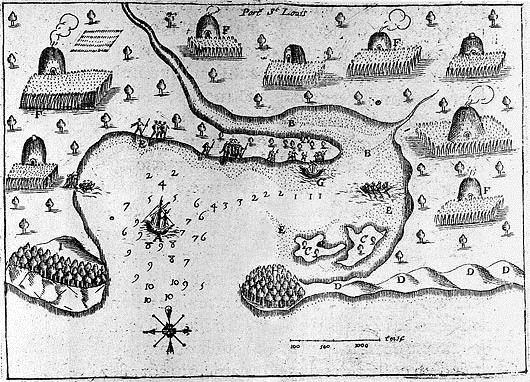 From the early maps of the area, from Samuel de Champlain, and from Martin Pring's and John Smith's accounts, it’s evident that the area where the Plymouth colony was established had in fact been evenly populated, and the land had been planted until just a few years before the Mayflower arrived. Indigenous people had not just abandoned their old town, as was assumed (Mourt's Relation (1622)), rather, the population has been decimated by disease. Squanto too, despite his ability to navigate native-colonial politics, and despite the fact that he survived two transatlantic trips and encounters with Europeans on both sides of the Atlantic, eventually succumbed to an ‘Indian fever.’ (Bradford, Of Plymouth Plantation) Later in the seventeenth century, Daniel Gookin, a resident of the Massachusetts Bay colony tried to establish some sense of the fall in population of local tribes: he estimates that pre-English settlement, the Narragansett numbered 3,000 warriors, but by 1674 this number was 300; he estimates that the Pequots and the Massachuset populations fell by similar numbers. (Gookin, Historical Collections, (147-9))

The impact colonialization had on Native American peoples was enormous. Either through disease, war, or cultural and religious assimilation, Native American people suffered as they attempted to work through the new realities of living on a colonised land. (See Francis Jennings, The Invasion of America: Indians, Colonisation, and the Cant of Conquest (New York: Norton, 1975)) But the final story is one of survival; Native communities across America, including the Wampanoag, continue to claim their heritage and practice their traditions.

Also in this section

. @PlymCityCentre has teamed up with @creationstation for a series of FREE arts and crafts workshops in #Plymouth.… https://t.co/TgfPmCxk4o