An illustrated children's book launched in November 2020 which explores the lesser-known parts of the Mayflower story from before the ship set sail.

'Journeys Over Land and Sea' has been written by Dr Anna Scott, West Lindsey District Council's Mayflower 400 Officer, and illustrated by Neil Baker of Electric Egg.

It describes the famous voyage from the perspective of Mary Brewster, wife of William Brewster who was one of the most well-known Pilgrims.

Mary Brewster and her family sailed from England to America in 1620 on the Mayflower - an historic voyage was just one in a dramatic series of journeys over land and sea in search of a better life.

Anna says: "Many of the Mayflower's passengers were women, some travelling with young children or as servants – what a journey that must have been. 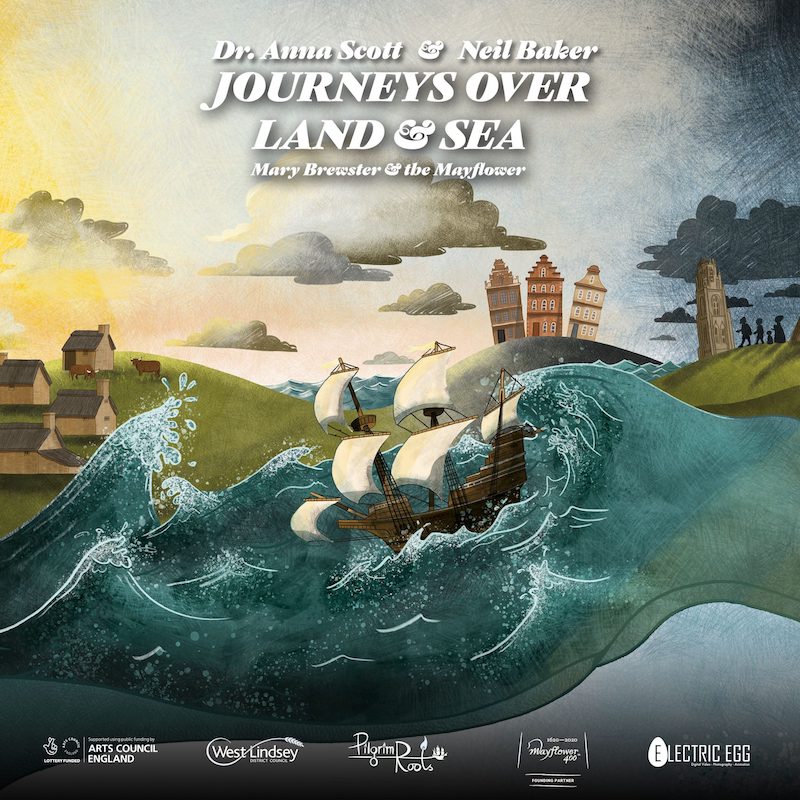 "But even more interesting is finding out about all the journeys many of them had to make even before they boarded that ship.

"By focusing on one of those women, Mary, we've been able to tell a story of faith, perseverance and what must have been, at times, massive personal sacrifice. Mary's story is a fascinating one, and we wanted to tell it from her perspective.

"Neil Baker's illustrations really bring that to life and will help bring the story to a new younger audience.

"His illustrations capture the essence of these themes and make it really accessible as a visual narrative – his pictures really are worth a thousand words."

Neil adds: "When illustrating Journeys Over Land and Sea, I was particularly concerned with the distances they travelled and the landscapes they passed through.

"I wanted the environments and the atmosphere of these locations to help carry some of the emotion Mary and her family might be feeling.

"The changing scenery I hope emphasises the enormity of their sacrifice and determination in the hope of realising a better life."

The book launched on Thursday 26 November, 2020, and was made available to all schools across West Lindsey.