On Sunday 29 August, the people of Plymouth were joined by visitors from across the country to watch The Hatchling take flight from the coast and soar across the sea in a powerful symbol of hope.

In a world first, the giant dragon puppet transformed into a kite, flew into the air and across Plymouth Sound, with an audience of tens of thousands on the Hoe and along the coast watching in awe.

The Hatchling, produced by Trigger with the support of Arts Council England and Plymouth City Council, unfolded from 28-29 August, having been postponed following the tragic shootings in Plymouth earlier in the month.

This unique theatrical event was a poignant reminder of the power of community, with more than 250 local people from groups across the city joining the cast of the performance.

Audiences witnessed the dragon hatch from an egg in the city centre on Saturday, with the public accompanying her as she explored her surroundings. In the evening, crowds gathered to see the dragon nest and fall asleep to a soothing lullaby sung by acapella group The Lost Sound.

The song was a moving moment of reflection for the city, accompanied by an atmospheric lantern parade.

Watch our short film and relive the amazing spectacle

On Sunday, storytellers, buskers and Plymouth’s own Roller Derby, lined the path towards the dragon’s final location. On route, the dragon - which is taller than a double decker bus - met the city’s other giant, monumental sculpture The Messenger outside Theatre Royal Plymouth.

Mary Anne from the theatre commented: “The Hatchling has really brought the spirit back to Plymouth”.

As The Hatchling approached the shoreline, a second egg revealed a beautiful pearl in homage to traditional dragon folklore, which danced in the air tempting her to fly.

Spectators on the Hoe witnessed the dragon make a miraculous transformation, turning into a kite with a 20m wingspan and flying across the water of Plymouth Sound in pursuit of the pearl, accompanied by original choral music by Ruth Chan. 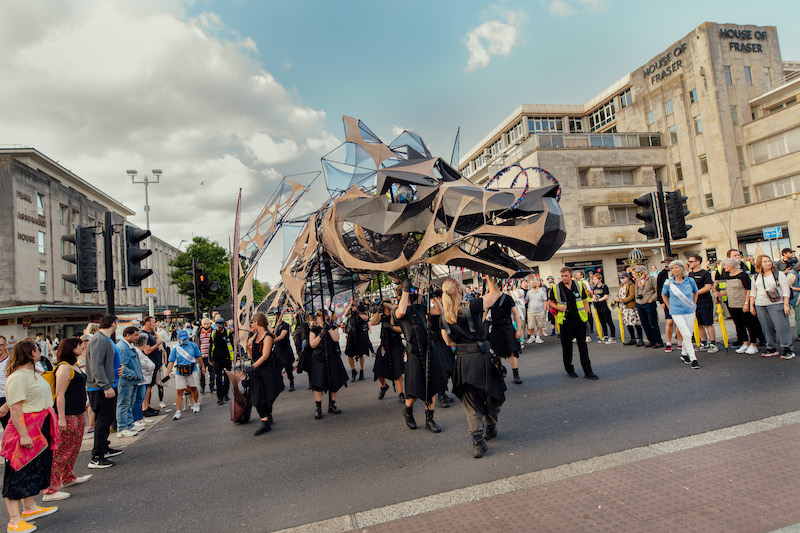 Nick Kelly, Leader of Plymouth City Council, said: “It was an amazing sight to watch tens of thousands of people on Plymouth Hoe witness The Hatchling transform in front of their eyes to rise and fly out across Plymouth Sound in pursuit of the pearl.

“The visual and audio effects made this a memorable sight that captivated the audience watching a world premiere right here in Plymouth. The Hoe Waterfront is such a magnificent amphitheatre and this spectacular and brilliant creation was perfect to lift our city.

“Congratulations to all of those involved in creating this magnificent piece of artistry. Never before have we seen a dragon rise and fly into the dark skies over Plymouth. Simply awe inspiring!” 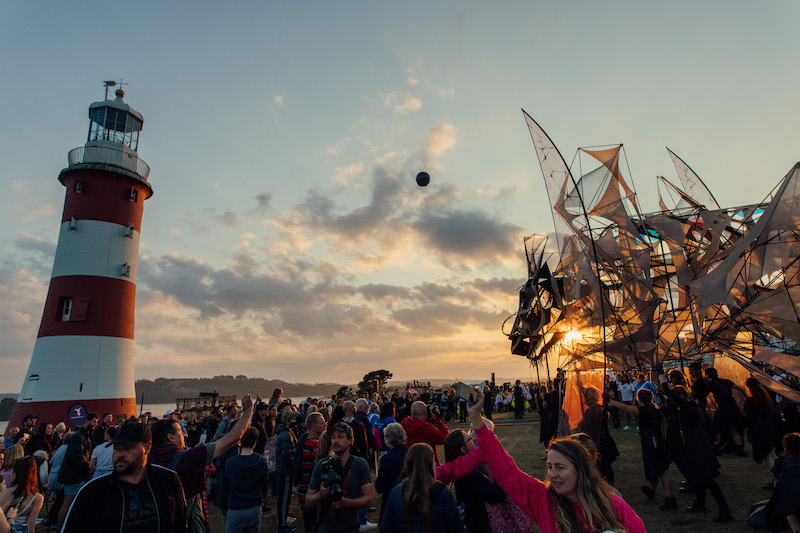 Charles Hackett, Chief Executive of Mayflower 400, said: “The Hatchling made for a beautiful and thrilling weekend in Plymouth, Britain’s Ocean City. The project is a testament to the amazing creativity in Plymouth and the South West.”

Becca Gill, Engagement Producer at Trigger, said: “It has been a pleasure to work with over 250 people from across 11 community groups in Plymouth – from Elder Tree’s craft and tai chi groups to the incredible cch Plymouth Roller Derby.

“A real highlight was the Nudge Community Builders parade – over 100 people made lanterns which were carried to the dragon to soothe her to sleep. The Plymouth community has greeted The Hatchling with their spirit, enthusiasm, skill and creativity. There have been so many incredible moments that will stay in my heart forever.” 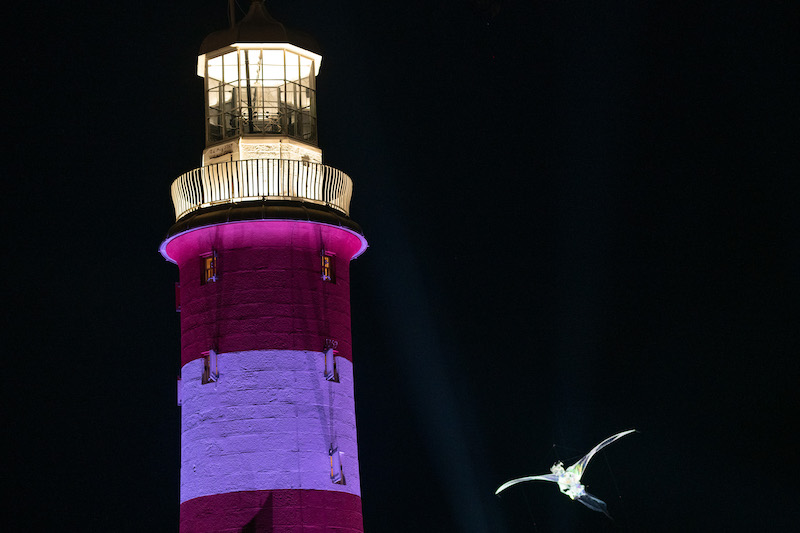 Angie Bual, Artistic Director of Trigger, said: “We are hugely grateful to the people of Plymouth for welcoming The Hatchling into the city with open arms. Our ambition was to bring people together for an experience that will live on in people’s memories long after she has gone.

“We hope we can share the magic of The Hatchling with many other places around the world in the future.”

Following its world premiere in Plymouth, The Hatchling will appear in London, heading a procession of more than 5,000 performers at Her Majesty The Queen’s Platinum Jubilee Pageant, taking place on Sunday 5 June, 2022.