The BTW Group learned about the apple tree from the Plymouth Tree Partnership. They then put them in touch with the team at Endsleigh Gardens Nursery in Devon who had cultivated them.

This Partnership had produced 40 trees that were mostly distributed in the Plymouth area for schools and community groups to plant, but luckily there were still a few left in stock.

The group approached Billericay Town Council to see if they could plant two of these trees to further mark the 400th anniversary of the Mayflower sailing.

Enthusiasm for the idea ensued and it was agreed that the trees would be planted in Festival Gardens, where there is ample space. The Council was pleased to fund the project.

It is known that four centuries ago, apples formed an important part of the early colonists' diet.

The 'Pilgrim 400' apple is a maiden tree that will produce a fruit that is round and rosy, culinary and sweet as it matures.

In 2017, DNA tests confirmed that the tree was unique and the following year, the 'Pilgrim 400' apple was officially registered as a local cultivar and has been provided with a Certificate of Provenance.

The ‘Pilgrim 400’ apple was born out of a conversation between two friends, Celia Steven and John Stirland.

Celia lives near Plymouth, Devon, and is the great granddaughter of Henry Merryweather, the nurseryman who raised the Bramley apple.

John is a horticulturist and a former presenter with Radio Nottingham and he lives in a village near the area from where some of the colonists hailed. 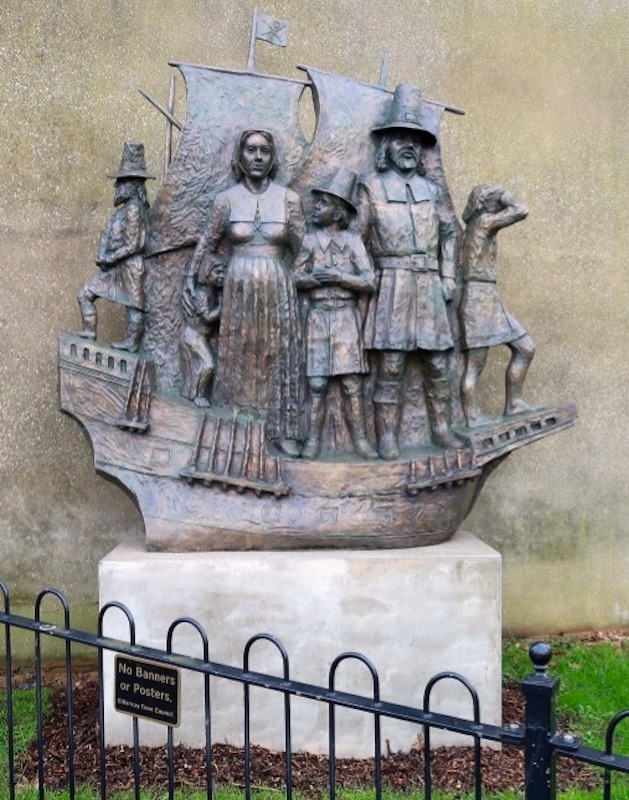 Billericay also has a two-metre-high bronze sculpture of the Mayflower and the Pilgrims.

It was created by John Doubleday (the same artist who sculpted the Lake Meadows "The Child in the Park") and is featured in the Jim Shields Garden at the intersection of the High Street and Western Road.

Protocol dictated that a town councillor was unable to attend because of the forthcoming May elections.

However, the BTW Group was joined for the planting by Brian Hughes, the Chairman of the town's Billericay Mayflower Twinning Association (BMTA) Mayflower 2020 Committee, Julian Whybra, also of that Committee, and wife Pat.

Planting had been delayed until after 29 March to keep in line with the Government’s Covid-19 lockdown rules.