Plymouth Rock is located on the shore at Plymouth Harbor in Massachusetts, and continues to divide opinion for those interested in the Mayflower story.

According to legend, many believe it to be the place where the Pilgrims disembarked the Mayflower some 400 years ago, after crossing the Atlantic from England.

However, there is no mention of the stone itself in William Bradford’s accounts, and it wasn’t until more than a century later that Thomas Faunce - a 94-year-old town record keeper and the son of a Pilgrim who had arrived in Plymouth in 1623 on another ship - reported its significance.

In 1774 (just 33 years after Faunce’s bold declaration) Plymouth Rock was accidentally split into two pieces during an attempt to move it.

Over the years, people slowly chipped away at the half of the rock that remained on shore - meaning fragments now exist across the globe.

So how, then, did part of the historic rock end up in a church in Central London?

In 2020, representatives from the Society of Mayflower Descendants in Europe travelled to North London to find out… 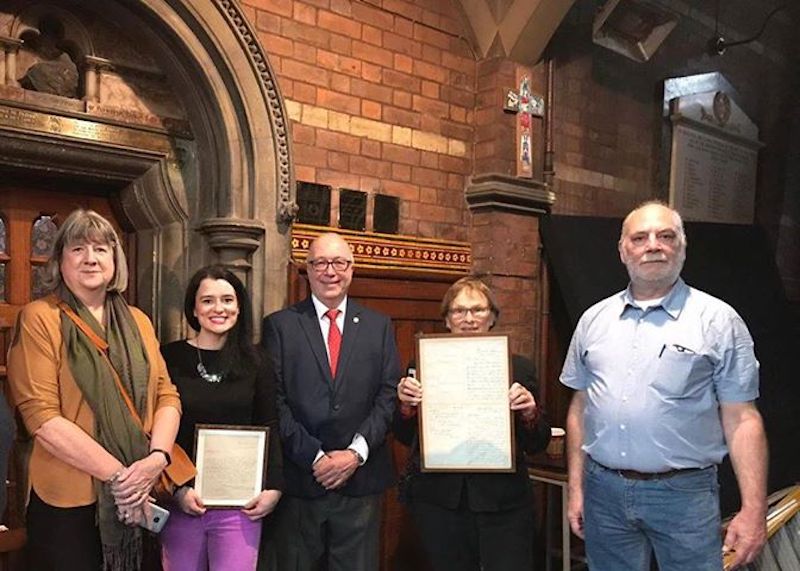 The church at the centre of the story is Union Chapel, which is located in the London Borough of Islington.

In February 2019, Greg Geissler of the Society of Mayflower Descendants in Europe arranged a visit to the Chapel to see the fragment of Plymouth Rock.

Emma Stell, of the Union Chapel Project, welcomed the group and explained some of the history of this beautiful and striking building – which is known as the ‘non-conformist cathedral’.

Union Chapel was formed as an act of dissent, a non-hierarchical church run by an elected body of members, and its roots were in non-conformist churches but also Anglicanism. 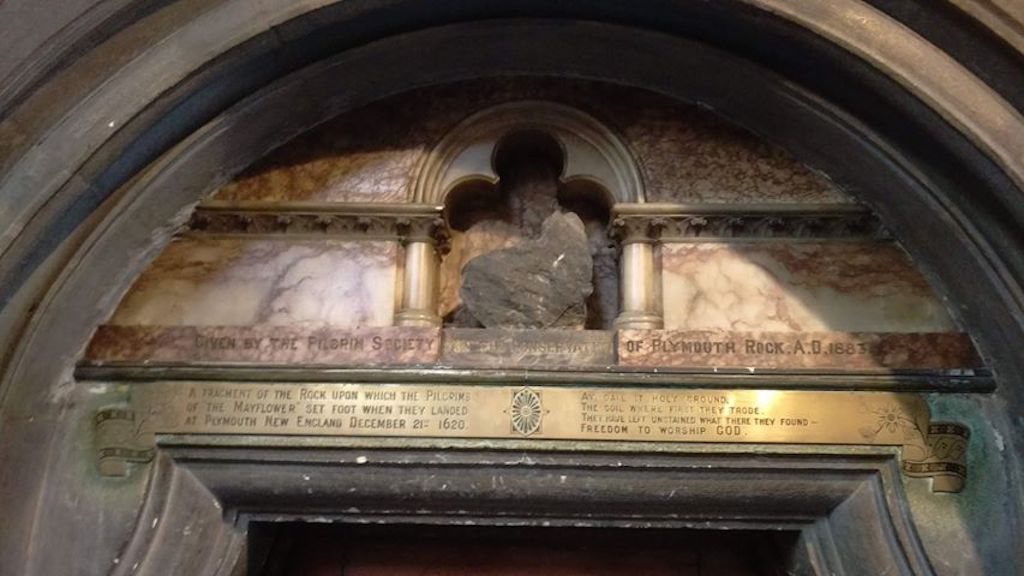 The fragment of Plymouth Rock at Union Chapel in London

From 1840 until 1892, the fashionable, well-to-do congregation had charismatic, well-connected minister named Henry Allen, who raised the funds for the present church; it was designed by James Cubitt, and is only one of three remaining churches to hold that status.

The church was opened by former Prime Minister William Gladstone in 1877, and was specifically designed to encourage dialogue, so that everyone could see and hear the preaching from the central pulpit.

Services were also known for their musicality, and there was lovely ornate stained glass, including rose window featuring angels, each playing a different instrument. Sadly this was lost on one side to a bomb during World War II, but the chapel still has one of the best organs in the world.

During the 20th century there was a declining congregation, and from 1980 there was a campaign mounted to save the building, which was Grade II Listed but is now Grade I, based on a number of features including the highly-innovative ventilation system. 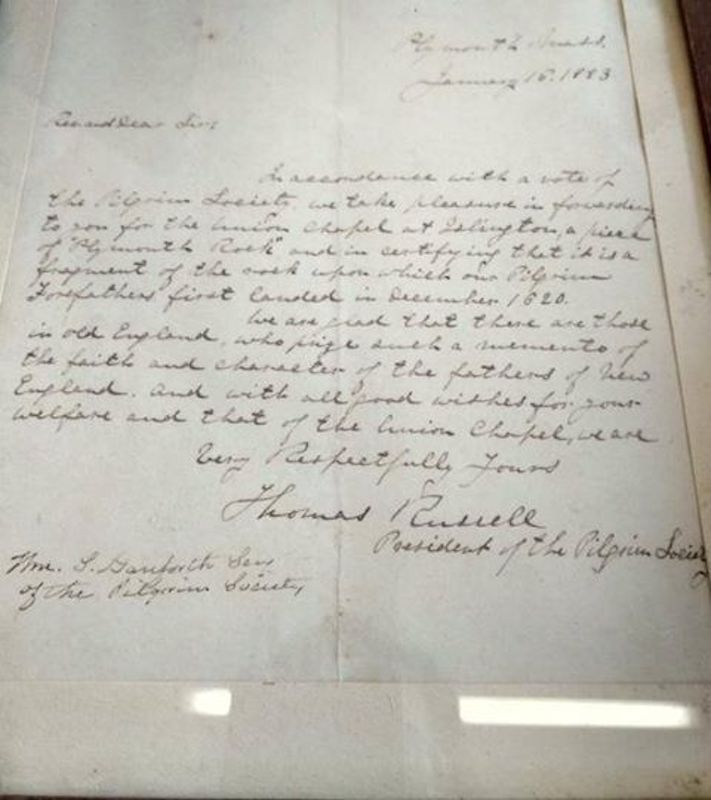 A letter from The Pilgrim Society to Henry Allen

Vicky Cosstick is social secretary of the Society of Mayflower Descendants in Europe. She explained: “The fragment of Plymouth Rock is embedded over a door on the right of the pulpit.

“It was given to Henry Allen in 1883 during a lecture tour he went on in US, and was apparently the last piece of rock to be gifted – leading us to wonder how many other pieces of the rock exist around the world!

“The provenance of the rock is confirmed by a letter from The Pilgrim Society to Henry Allen which exists in the archives of the Chapel, but which we were unfortunately not able to see at this time.

“We had a plaque made which we presented to the Chapel and celebrated its installation on 6 December, 2019. We also saw the three letters of provenance they hold at the chapel, which are being reframed to show near the fragment and the plaque.”

The plaque itself reads:

A receipt in 1883 of a fragment of Plymouth Rock to commemorate the 400th Anniversary in 2020 of the sailing of the Mayflower ship to Plymouth, USA

By the Society of Mayflower Descendants in Europe