An exciting and innovative new gallery has opened at Bassetlaw Museum in Nottinghamshire celebrating the life of William Brewster, one of the region’s most famous sons, as part of the Mayflower 400 commemorations.

The Pilgrims Gallery in the pretty market town of Retford is part of a £750,000 National Lottery-funded project which marks the 400th anniversary of the Mayflower’s voyage to America in 1620.

The town is in the heart of an area that was a hotbed of radical religious thinking in the 17th century, home to many of the Separatists who organised the Mayflower's pioneering voyage to America.

The Gallery has two sections: one part is a reproduction of an early 17th century study and the other is a contemporary exhibition space.

The study is not dissimilar to one which would have existed at the nearby Scrooby Manor where Brewster lived. 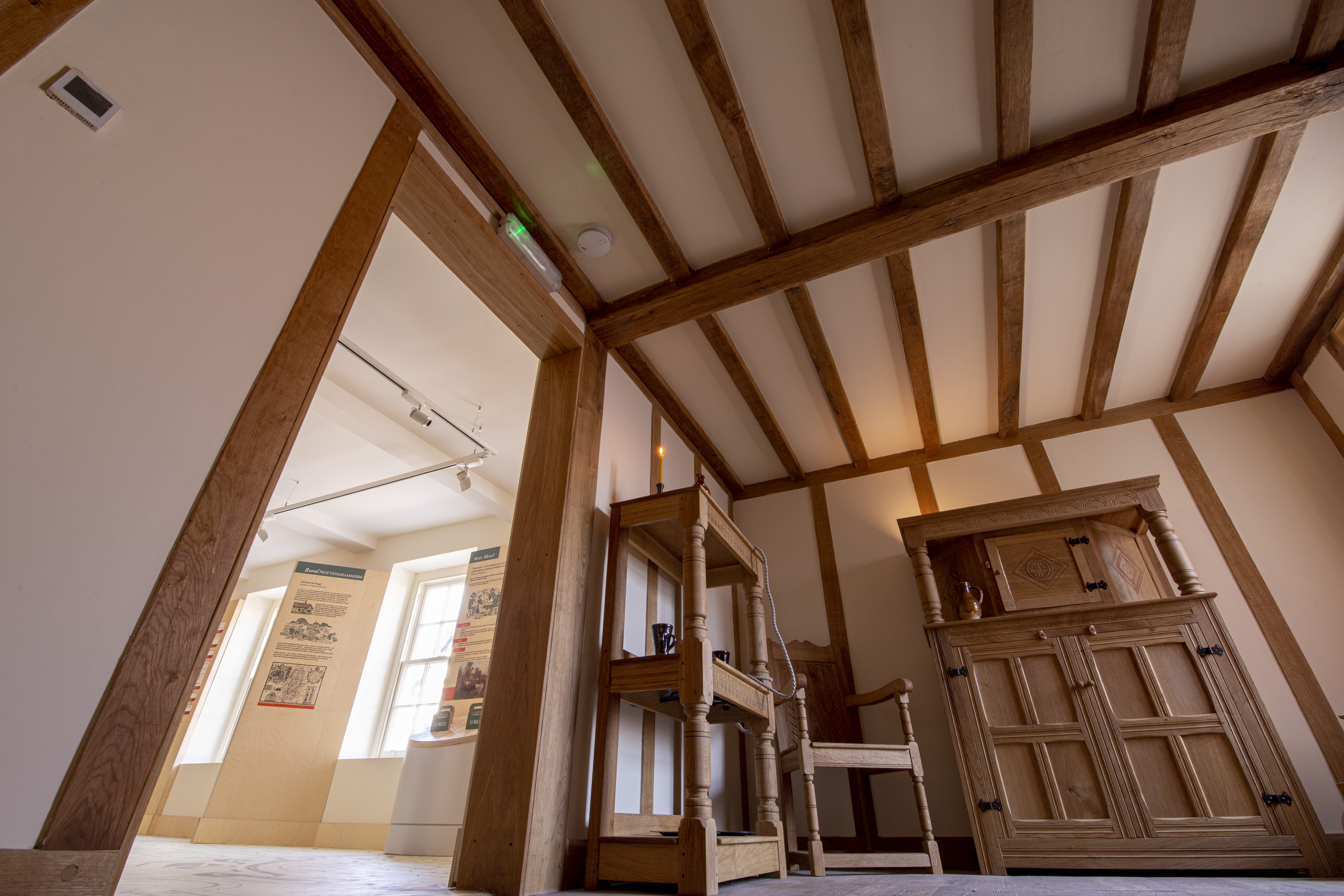 In here, through a mirror, visitors see William recounting four stories: his early life in North Nottinghamshire; the reasons why the Separatists wished to break away from the Church of England; the life the Pilgrims experienced in Leiden, Holland and finally, the journey aboard the Mayflower and their later life in America.

There is also a ‘story chair’ where visitors can sit and listen to King James becoming angry with the Separatists; the child’s voice of Jonathan Brewster talking about being forced to leave his home and everything he is familiar with; Mary Brewster, William’s wife explaining her fears and also her faith, which enabled her to follow her husband to a new and unknown life ahead; and a further story from a traveller along the Great North Road who recounts the secretive and dangerous times that existed in 1608.

The exhibition space includes interpretation highlighting the themes of Religious Tolerance, Freedom and Migration; challenges which are as relevant in today’s world as they were when the Separatists fought for the right to practice their beliefs. There are panels that give more information on the women and children involved in the Pilgrim story, and others that tell of the Wampanoag, the Native Americans who lived in Massachusetts when the Mayflower landed in 1620.

There are dressing up costumes for visitors of all ages, and old fashioned games such as Pilgrim dominoes contrast with quizzes on modern tablets. Bassetlaw District Council worked closely with Workhaus, the gallery designers, to ensure that visitors of whatever age would find the experience fun, entertaining and thought-provoking.  Assigning children the character of one of the Mayflower’s passengers for example, brings home to them the reality that half of the people who travelled on the ship died during that first winter in America. 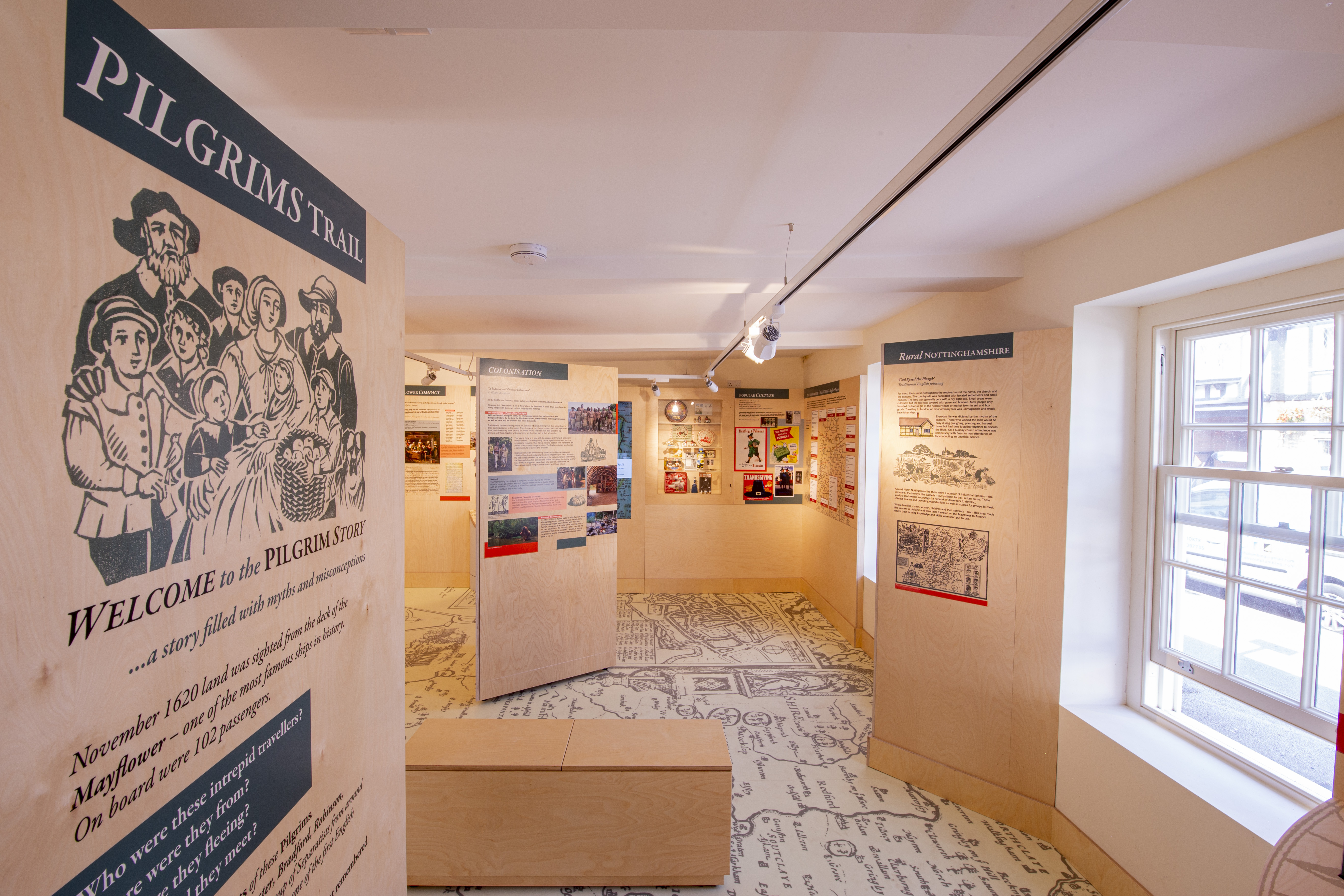 Bassetlaw District Council’s Deputy Leader Councillor Jo White said; “One of the features within the gallery that I am most proud of is how we have tackled telling the controversial aspects of the subject of colonisation.  We have done this by working closely with the Wampanoag nation with whom we have built a strong relationship and they have written their own story and provided the images that accompany those panels”.

John Everitt, Committee member for England: Midlands & East at The National Lottery Heritage Fund, said: “It’s fantastic to see the gallery opening in time for the landmark Mayflower 400 anniversary next year. With many of the ship’s passengers, the Separatists, being from the East Midlands, the story of the Mayflower is intrinsic to the heritage of the area, and thanks to National Lottery players the inspiring stories of their journeys and pursuit of tolerance and freedom, will live on through the gallery.”

The ‘Pilgrim Roots’ made possible thanks to The National Lottery players, also includes the upgrading of an existing Mayflower Trail with new interpretation at Babworth, Scrooby and Sturton-le-Steeple in Nottinghamshire and Austerfield and Gainsborough in neighbouring counties; a new website pilgrimroots.org which is now live; an exciting events calendar associated with the Mayflower 400 anniversary in 2020 and the appointment of two additional members of staff, dedicated to improving the visitor experience and helping to tell the story of North Nottinghamshire’s Mayflower pilgrims to the rest of the world.

Pilgrims Gallery opened on 19 September 2019 and is open Monday to Saturday 10.00am until 5.00pm.  As part of a comprehensive evaluation plan, Bassetlaw District Council confirmed they would consider opening on a Sunday if there is a demand.  The Gallery will also offer evening tours on pre-determined dates throughout the year.