An unforgettable private 5-day adventure across the UK tracing the journey of the Pilgrims who set sail on the Mayflower in 1620.

The Nottinghamshire and South Yorkshire villages where the whole Mayflower story began! Enjoy lunch at a local pub - maybe The Pilgrim Fathers at Scrooby - where we will meet our local guide. The afternoon visits will take us first to the 900-year-old Babworth Church, where Richard Clyfton’s preaching was hugely influential and eventually led to the Separatist movement, then Scrooby, where William Brewster was brought up. We then head on to Austerfield to see the very font where William Bradford, who went on to govern the new Plymouth colony for over 30 years, was baptised in St Helenas Church.

Gainsborough and Boston: Gainsborough Old Hall, one of the most complete medieval manor houses to survive in the UK. In the early 1600s it was home to the Hickman family who had separatist sympathies. Next, Boston, where in 1607 the Pilgrims from Scrooby and the surrounding area sought their first escape to Holland in search of religious freedom. See the spot where they were rounded up, visit Boston Guildhall, and enter the very courtroom where they were charged, and the two tiny cells where the leaders of the group, including Brewster and Bradford, were detained. 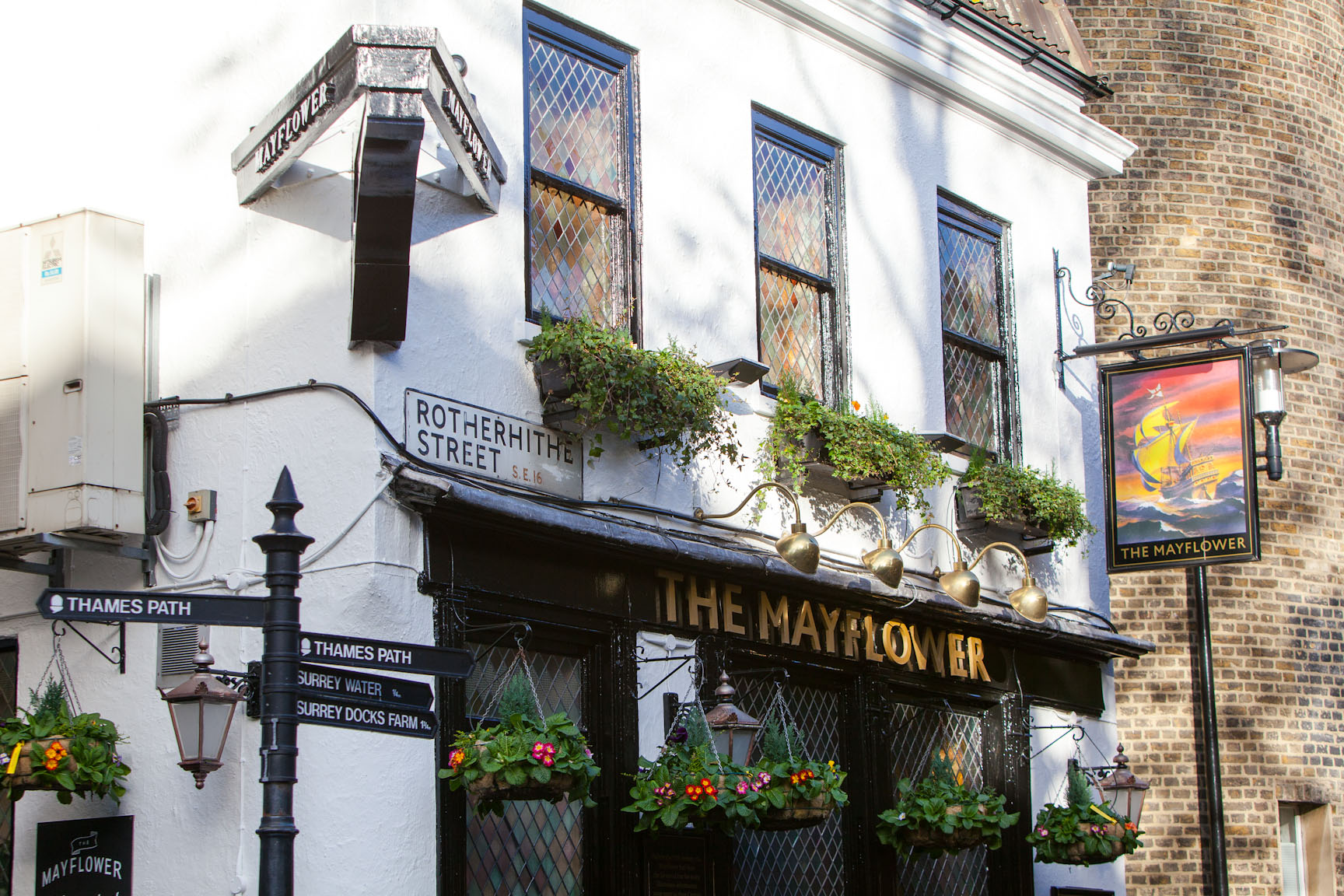 The Mayflower Pub in London

Rotherhithe and the Borough of Southwark on the South Bank of the River Thames, London. This was the Mayflower’s home port (though she was built in Harwich) and the ship’s Captain, Christopher Jones was buried in the churchyard. The historic Mayflower Inn, said to be the oldest pub on the Thames, is a wonderfully atmospheric location for lunch. It also has a Mayflower descendants’ book, and those who can prove their credentials are invited to sign it.

We can also visit places such as St Mary’s Church, Southwark Cathedral with its links to Harvard University, The Clink Museum or the Golden Hind, the replica of Drake’s 16th-century ship which will give a great insight into life at sea during the period leading up to 1620.

Dartmouth and Plymouth, Devon. The Speedwell had to put in for repairs at the beautiful river port of Dartmouth. See the place where the Mayflower laid at anchor and visit Bayards Cove with its lovely old pub. Our guides will be the town crier and consort in their full regalia.

Next, the historic maritime port of Plymouth, where the Mayflower finally left on its famous voyage, one of many significant adventures to leave from this famous city. Visit the historic Barbican area, see the Mayflower Steps and Museum, and visit the Blackfriars Distillery and home of Plymouth Gin, said to contain the room where the Pilgrims had their final supper before departure.

Still in Plymouth, look at Island House where many of the Pilgrims lodged, and stand on Plymouth Hoe, looking out on one of the world’s finest natural harbours and the scene of some of the world’s most iconic voyages, including, of course, the Mayflower’s. 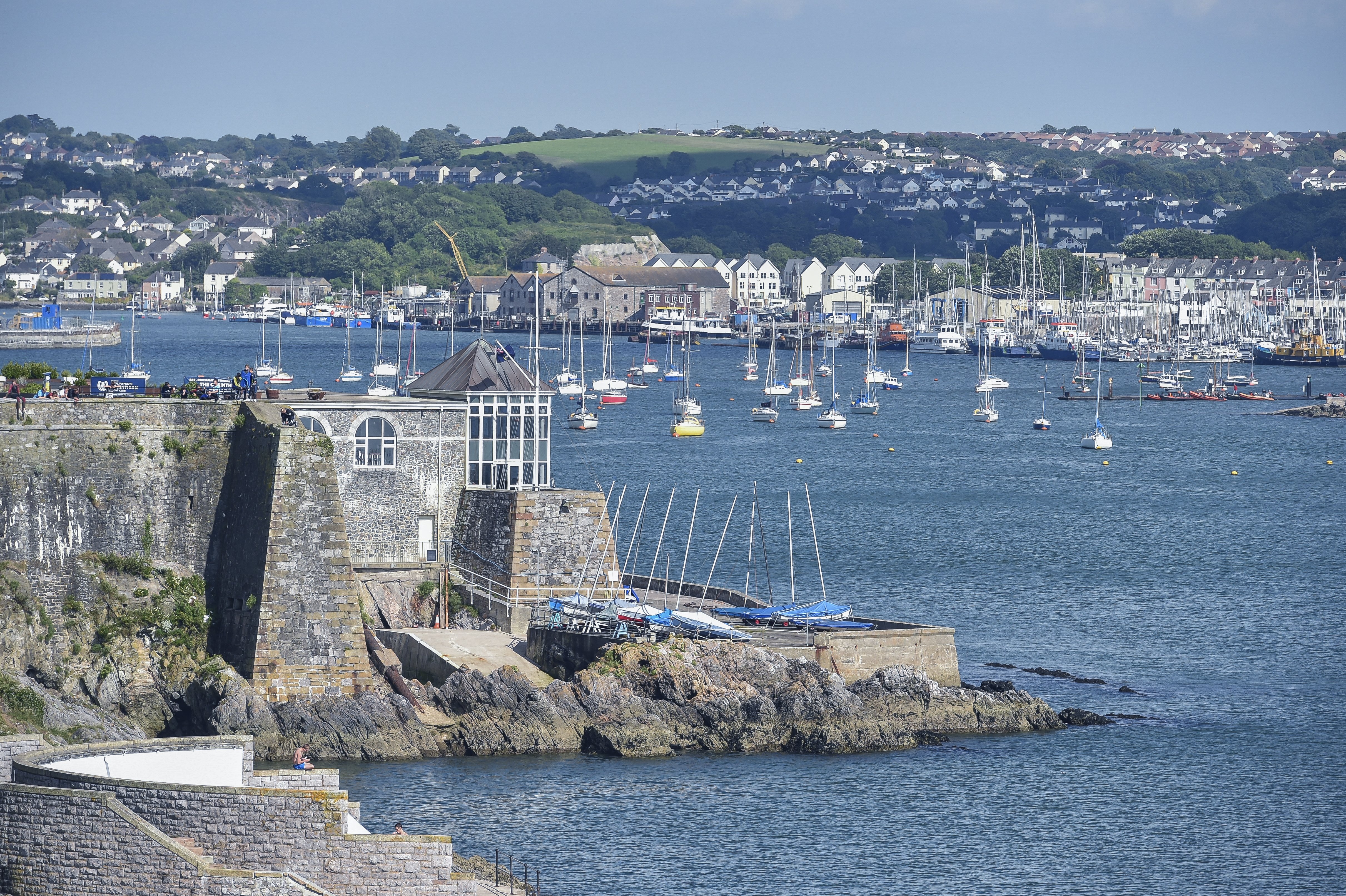 This tour is flexible and can include visits to:

Day 1: Nottinghamshire and South Yorkshire Villages
Day 2: Gainsborough Old Hall and Boston
Day 3: Rotherhithe in London and the Borough of Southwark
Day 4: Dartmouth and Plymouth (We may take an optional guided tour of the Plymouth Gin distillery)
Day 5: Plymouth Hoe

Itinerary can be adapted for all, some locations may not be fully accessible.

All year, subject to availability