A new variety of apple is set to be launched by Pilgrim Primary Academy in Plymouth, when its pupils plant one of the first Mayflower 400 commemoration trees.

Named ‘Pilgrim 400’, the new apple variety has been cultivated from the original ‘Pilgrim 400’ tree that was grown from a pip planted in about 1970 in a residential garden in Southwell, Nottinghamshire – which neighboured the original Bramley seedling tree.

It will be one of 20 Pilgrim 400 saplings, the first of which was planted in Scrooby, Nottinghamshire, and will be the first planting in the South West.

The project, run by Plymouth Tree Partnership, is one of many exciting initiatives that will commemorate the 400th anniversary of the Mayflower’s historic voyage in 1620.

It has been funded by Mayflower Community Sparks - a partnership project between Mayflower 400, Plymouth Culture, Plymouth City Council, The Box, Plymouth and Vital Sparks, with funding via Arts Council England.

Born from a conversation between two friends, the idea for the new apple variety came from John Stirland, a horticulturalist and former Radio Nottingham presenter, and Celia Steven, the granddaughter of nurseryman Henry Merryweather, who raised the Bramley apple. 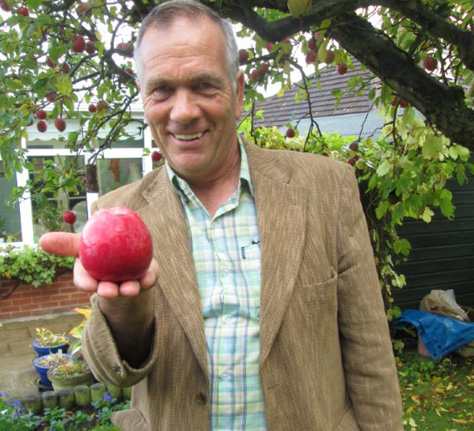 John Stirland with one of the Pilgrim Apples

John lives near the Pilgrim Roots area in Nottinghamshire, and Celia near Plymouth, the Pilgrims’ final departure point.

Pilgrim Primary Academy will plant its tree on Friday, 1 November during a whole day of activities exploring the Mayflower story. They will be joined by the Deputy Lord Mayor, Cllr Terri Beer, at 10am for the tree-planting.

Lisa Meek, head teacher, said: "The new tree will be a permanent reminder of the school's links to the Mayflower story. Children, parents and staff are looking forward to planting it, helping the tree to grow well and collecting its apples for years to come."

In addition, for community groups and schools who would like to join in the Mayflower 400 commemorations by planting their own tree, Plymouth Tree Partnership is cultivating a further 40 trees that will be ready in the autumn and offered for sale to schools and community groups.

For further information on the story behind the ‘Pilgrim 400’ apple and for details of how schools and community groups may apply for one of the trees being grown by Plymouth Tree Partnership visit www.pilgrim400.co.uk