An installation at Illuminate Plymouth 2019

The details of a year-long four-nation commemoration programme for the 400th anniversary of the sailing of the Mayflower, involving the UK, USA, Netherlands and Wampanoag nations, are announced today.

It will commemorate and explore the journey and impact of one of history’s most famous ships, The Mayflower, including:

A commemorative year of events and exhibitions around the destinations central to the Mayflower story, will mark the 400th anniversary of the 1620 journey undertaken by 102 passengers and crew to the ‘new world’ of America. To mark the day the ship set sail, a major four nations public ceremony will take place in Plymouth on 16 September, 2020.

In the UK, Mayflower 400 will bring together destinations from across the UK where Mayflower history was written, including Austerfield, Doncaster; Scrooby & Babworth, Nottinghamshire; Gainsborough, Lincolnshire; Boston, Lincolnshire; Immingham, Dorking, Lincolnshire; Worcestershire; Chorley, Lancashire; Harwich, Essex; Southwark, London; City of London, London; Southampton, Hampshire; Dartmouth, Devon, and Plymouth, Devon. Plymouth was the Mayflower’s final departure point in the UK, and the city is the lead partner in the commemorations.

The Mayflower 400 commemoration will reflect all aspects of this story, and central to the programme will be the collaboration with the Wampanoag nation, who have inhabited present day Massachusetts and Eastern Rhode Island for more than 12,000 years. From aiding the survival of those who made the journey 400 years ago, to understanding the impact of colonisation on the Native American people, their involvement in the Mayflower narrative is critical.

Mayflower 400 recognises that 28 November has become a National Day of Mourning for Native American nations and will address the ongoing impact of colonialism. Members of the Wampanoag Advisory Committee have been involved in developing the Mayflower 400 programme and, through events including This Land and the Wampum Belt exhibition, they will tell the story of the arrival of the Mayflower passengers in their own words. 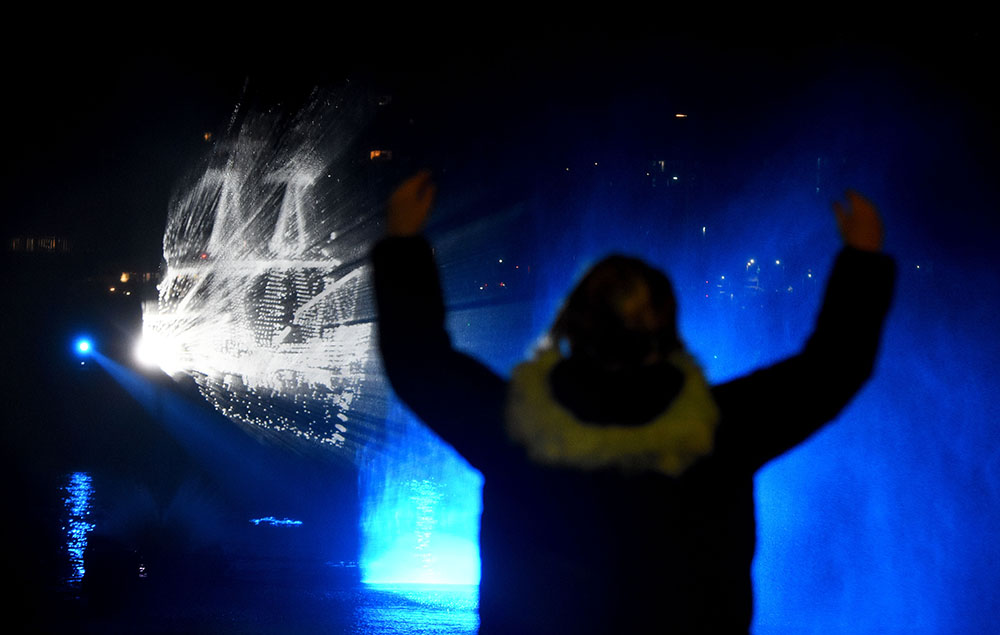 An image from Illuminate Plymouth, which begins again, starting the Mayflower 400 year

Paula Peters, from the Mayflower 400 Wampanoag Advisory Committee, said: "The Mayflower story cannot honestly be told without including the Wampanoag nation and the devastating impact of colonisation on indigenous people. We are grateful to have been invited to contribute our historical and cultural knowledge to this commemoration unencumbered by centuries of marginalisation and uncensored by contemporary event planners.

"Exhibits, events and activities produced by the Wampanoag or developed under our guidance will challenge what you may think you know about colonisation in a very authentic and, we hope, thought-provoking way. But the biggest takeaway we hope you discover is that we are still here.”

The Mayflower 400 programme has been informed by the four key Mayflower values: freedom, humanity, imagination and future. The majority of events will be free for people to attend and enjoy. 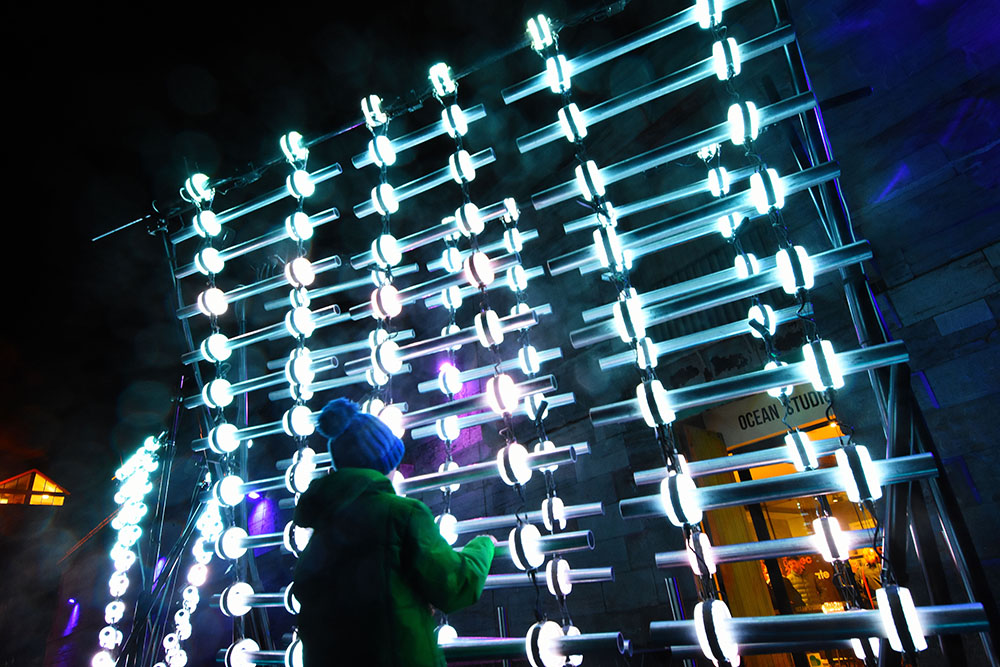 A light installation at Illuminate Plymouth

Highlights from the Mayflower 400 programme include*:

- Some Call it Home, composed by Jonathan Dawe (NYC) and Jane O’Leary (a direct descendant of Mayflower passenger Richard Warren) and taking place at Theatre Royal Plymouth. A moving and thought-provoking music, vocal and visual experience revealing how human destiny has been shaped from 1620 to the present day by our relationship with planet Earth. Created, produced, and directed by Dr. Robert Taub with music performed live by an ensemble from Bournemouth Symphony Orchestra, it will feature the international soloists, Grammy-nominated baritone Randall Scarlata and soprano Deborah York. (24 and 25 March 2020)

- Mayflower 400: Legend & Legacy, a flagship exhibition at The Box, Plymouth’s new multi-million pound cultural and heritage centre, which is set to open in spring 2020. Curated by Jo Loosemore in partnership with the Wampanoag Native American Advisory Committee, and with the help of more than 100 museums, libraries and archives from across the UK, the US and the Netherlands, this exhibition will present an epic journey of survival and imagination, told through objects, images and ideas from both sides of the Atlantic. (Spring 2020 to Autumn 2021) 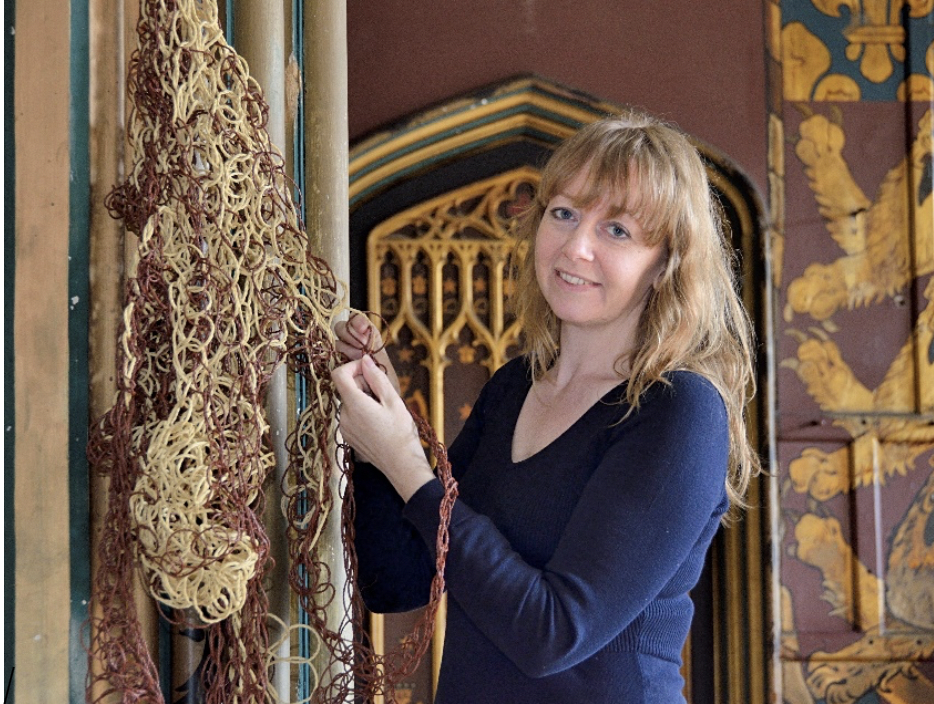 - This Land, a major new work of international, community theatre that wrestles with the history surrounding the voyage of the Mayflower and the impact of its arrival on the shores of Massachusetts. Performed and created by citizens of Plymouth UK and members of the Wampanoag Tribe from Massachusetts USA, with text by Nick Stimson and songs written and performed by Seth Lakeman. Directed by Alan Lane from Slung Low Company and produced by Theatre Royal Plymouth. (16 to 20 June 2020)

- Settlement, a collaborative concept between Plymouth-based collective the Conscious Sisters and Native American artist Cannupa Hanska Luger. Twenty Native American artists will present and live in a radical, large-scale installation of public art in Plymouth’s Central Park. The artists will explore colonialism and the deep effects it has had on indigenous people. Settlement will be designed by indigenous artists with the structure created by builders, makers and artists from Plymouth and the USA. A four-week long engagement programme for all to take part in will accompany the exhibition. (6 July to 2 August 2020)

- Pilgrim Woman, a new sculpture by artist and sculptor Rachel Carter which will feature a Tudor-style dress with woven panels created by Carter in workshops with women’s groups based in the Pilgrim Roots areas of the UK. The dress, with Rachel wearing it, has been digitally scanned and will be cast in bronze and revealed in a location within the Pilgrim Roots region in 2020. Pilgrim Woman has been influenced by the Nottingham textile trade and the practices of the Wampanoag People who traditionally wore decorative items such as belts, neck ware and cuffs depicting stories and family symbols. (Summer 2020)

- Southampton’s Anniversary Weekend –family activities including the reveal of the newly-restored Mayflower Monument; Parade of Sail; Mayflower-themed musical and dance productions at the Mayflower Theatre; historical events at God’s House Tower; and activities at SeaCity Museum as part of Wampum: Stories from the Shells of Native America. (14 to 16 August 2020) 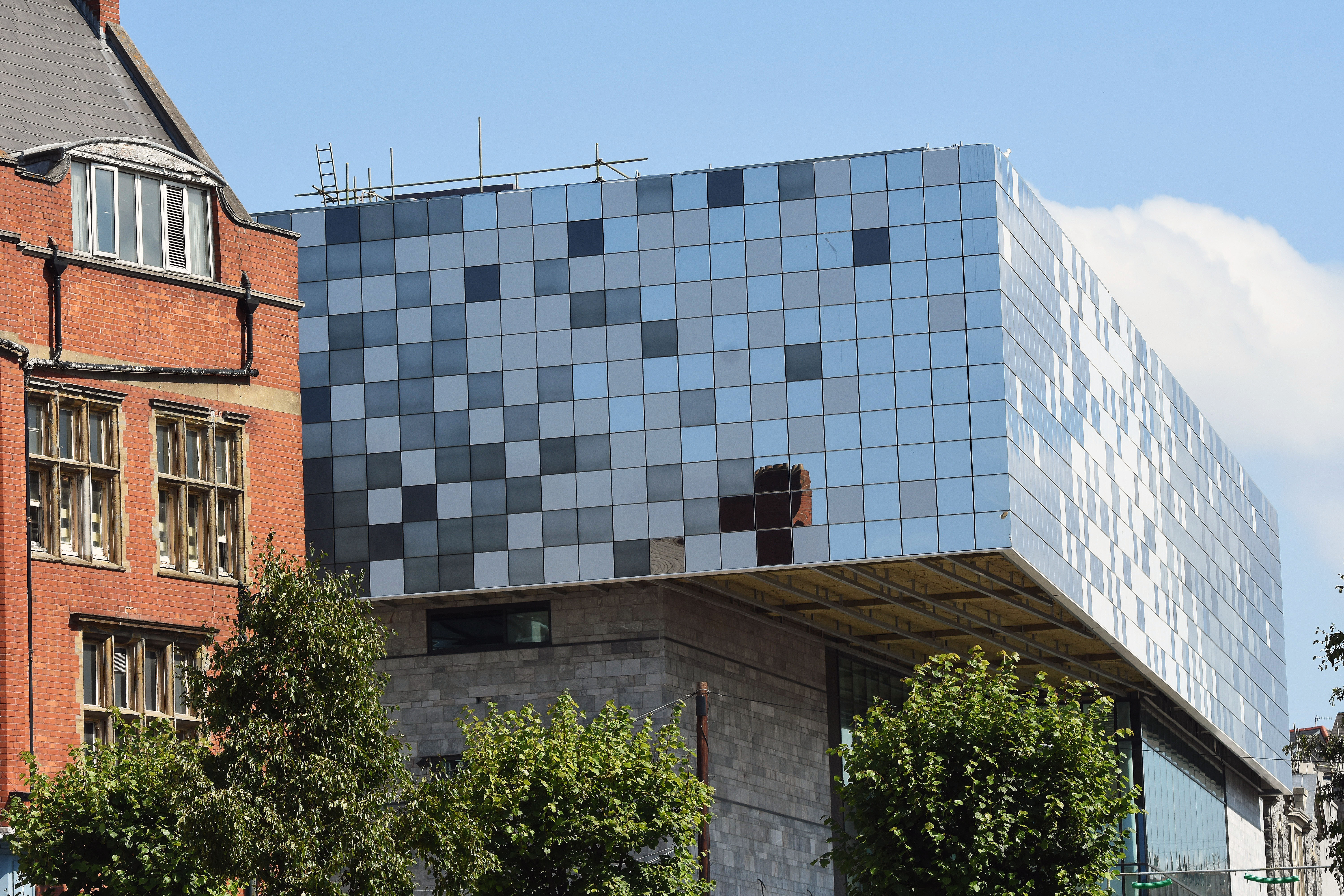 - Mayflower Four Nations Ceremony, a civic ceremony attended by representatives from the UK, the US, the Netherlands and the Wampanoag nations, 400 years to the day the passengers left. This will be the culmination of Mayflower Week, which will also include a visit from Matthew, a replica 15th century tall ship and a spectacular gathering of military ships from the US, Netherlands and UK at Plymouth Sound for a Mayflower Muster. (16 September 2020)

- From the Few to the Many, a global arts film created by international award-winning artist Hetain Patel (recipient of the 2019 Film London Jarman award) and young people in the Pilgrim Roots region. This new commission will explore how the few who set sail on the Mayflower in 1620 have become a global community of 30 million descendants today. (November 2020)

- Mayflower 400 Tours - a collection of themed scheduled and fully-customisable tours launched for visitors to learn more about the Pilgrims’ lives in England before they set sail from Plymouth, as well as sharing insights into the Mayflower journey. Tours will include The Pilgrim Roots region, with expert guides and visits to the key historic sites related to the story including Boston Guildhall - where visitors can sit in the cells where the Pilgrims were held – a new exhibition exploring the relationship between Gainsborough and the Mayflower Pilgrims up at Gainsborough Old Hall and the new Pilgrims Gallery in Retford. All tours visit Plymouth, and can include London and further UK Mayflower destinations. (2020) 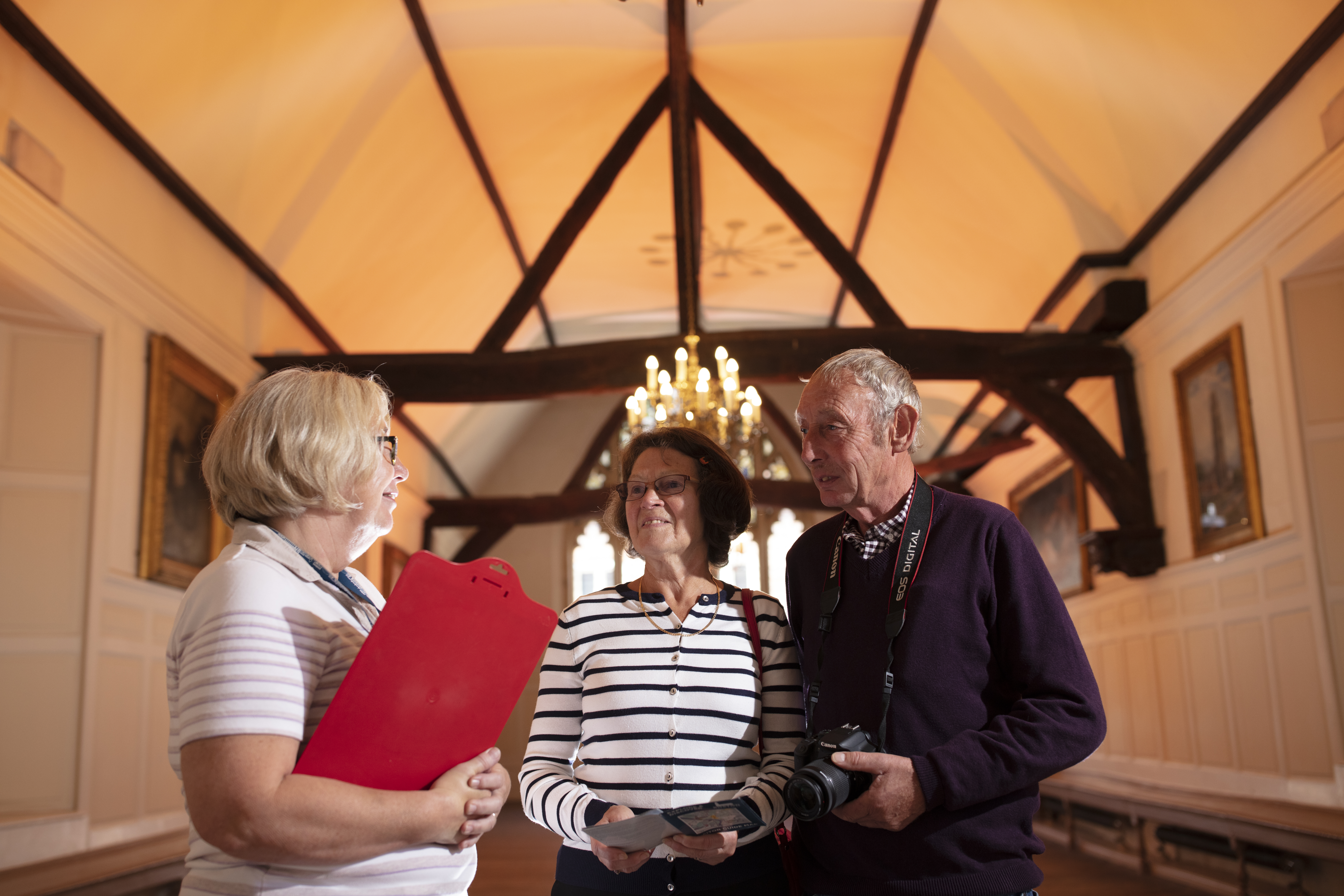 - Challenging the Myth, a cultural programme in Gainsborough funded by £100,000 from Arts Council England which will re-imagine the Pilgrims’ story for today through performance, music, storytelling, exhibitions, writing and radio. (2020)

- ‘Pilgrim 400’ Apple Project, for which a brand new apple variety has been grown in Nottinghamshire by horticulturalist and BBC radio gardening correspondent John Stirland to commemorate 400 years since the sailing of the Mayflower to America. Twenty special variety apple trees have been grown as gifts to destinations linked to the Mayflower story across the UK and the US. The first of these trees was planted in Scrooby, North Nottinghamshire, in September 2019.

Adrian Vinken OBE, Chair of Mayflower 400, said: “The coming Mayflower 400 year will see this historic world-changing voyage commemorated at an appropriately international level. As well as simply marking the voyage of the Mayflower and her passengers, the year will also reflect the impact the resulting colonisation had on the Wampanoag Nation through a wide range of exhibitions and theatrical productions throughout 2020.

"It’s been particularly rewarding to work with our Wampanoag, American and Dutch colleagues in the co-creation of many key Mayflower 400 activities, ensuring that 2020 is a genuine four nations commemoration.”

New Mayflower 400 compositions by Clive Jenkins and Carson Cooman will be performed during organ recitals for… https://t.co/AMeGvNUcfO