For this Re-informed video we return to Speedwell, the large-scale art installation that has transformed the Mount Batten Breakwater in Plymouth.

The artists who created the installation respond to some of the public’s thoughts and feedback to the artwork and we speak to the team of volunteer Mayflower Makers who have been canvassing public opinion - as well as getting their thoughts on what Speedwell represents.

The installation was created by local collective Still/Moving who have been collecting messages provoked by Speedwell and recording them on tags tied to the artwork. They show us some of the messages received so far and explain how you can leave yours.

Measuring 63m long and 6m high, 'Speedwell' uses illuminated signage comprising 3,723 LED lights to invite viewers to ask complex questions about themselves, the damaged planet and the legacy of the pivotal journeys made by the Mayflower and its companion ship the Speedwell.

The story behind Speedwell

Laura Hopes, co-director of Still/Moving, explains: “Speedwell responds to the idea that the settlers on board the Mayflower were sailing to what they felt was a ‘new world’.

“Speedwell also reflects on the idea around the fact that we really need to look after this world, and we’ve been really heartened to hear the reactions of the community here in Plymouth that these messages are welcome and that they provoke a lot of conversation and discussion from people re-addressing their understanding of the history of the Mayflower – perhaps for the first time – so it’s been really great in that regard.”

What Speedwell means to people 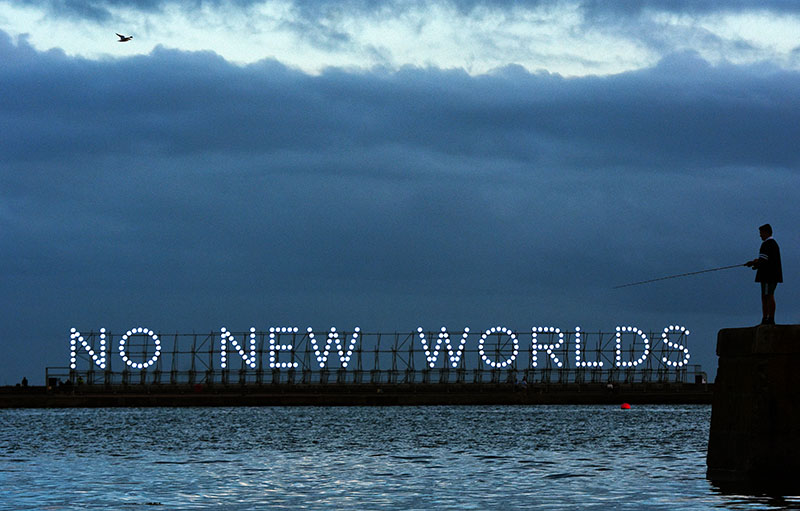 Laura Hopes comments: “This sculpture is very much speaking about the idea of colonisation and the effect on people who are impacted by colonisation, and the fact that it’s not a history that is over and finished 400 years ago.

“It continues to impact on people worldwide today, and I think in the light of the Black Lives Matters protests, what people are coming to realise is what we’re trying to explore with this – that every action has a consequence and that these histories are still live and incredibly painful to many people worldwide.

"I think that culture has an important voice in times of uncertainty.” 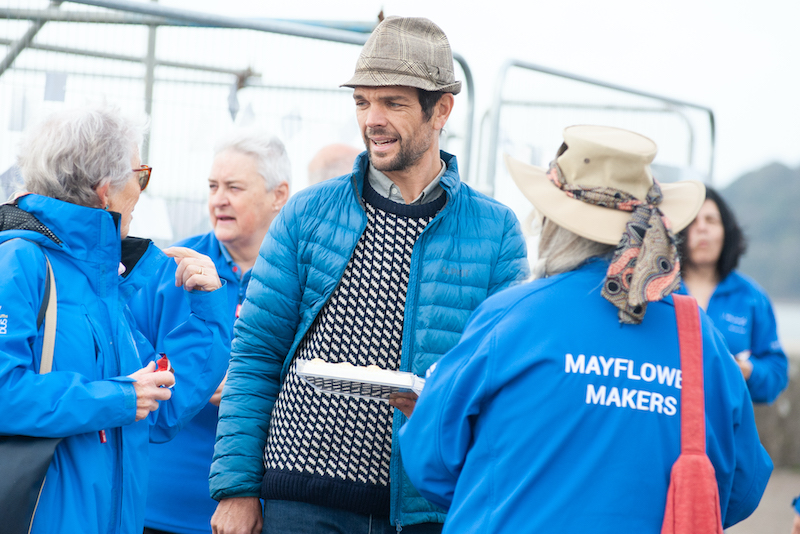 Martin Hampton, co-director of Still/Moving, says: “The word ‘new’ can mean just different – something that you’ve never been to before, but I think what we are exploring with this structure is this idea that the new world has become this phrase to somehow airbrush out what came before it.

Neil Minion, Mayflower Makers co-ordinator, adds: “The fact that it opens up conversation to people to say that when the Mayflower sailed and landed in America, it wasn’t a new world in that there were already people there – and that’s really important.

“It’s also opened up the conversation to allow the Native Americans to be able to tell their side of the story.” 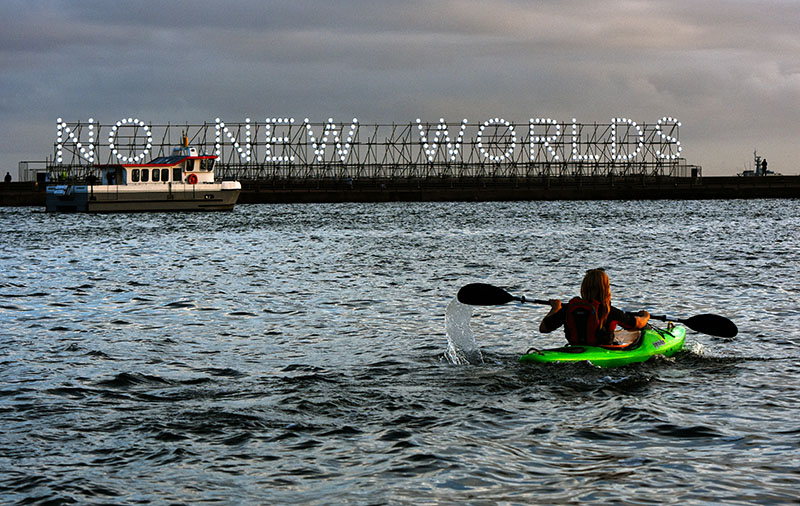 Laura Hopes reveals: “We felt that we were given a really incredible opportunity to share our voice and the huge scale of the structure.

“But because it’s in the public realm, we really wanted it to open up conversations and for people to leave their responses to the structure in a COVID-safe way.

“So, this whole bank of people’s voices – of visitors to the city or people who live here – it’s kind of a beautiful archive of people’s responses, their thoughts, and is a way to add their voice to the structure as well.”

What the public think about Speedwell 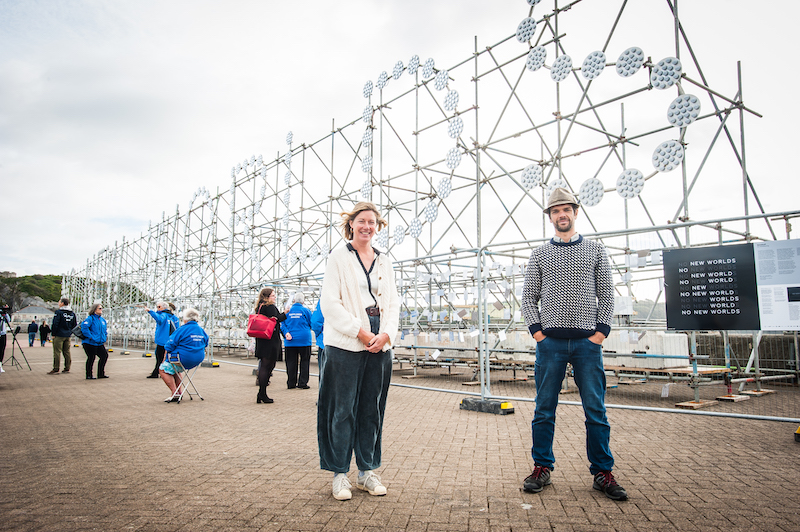 Martin Hampton says: “People have responded really, really positively on the whole to the structure, and I think that with the help of the volunteers who have been engaging with people and starting conversations, people have really got their heads around it and been giving incredibly interesting responses.

“To make a direct link between the money that came from colonisation to the funding that made this work possible is maybe a bit of a long shot but in many ways, there is a link.

“The fact that we live in Europe, where we have access to funding for the arts, where there is even in these times of COVID, still support out there for artistic projects and where culture is valued by the state, is something to be grateful for.

“But at the same time, it’s something that is made possible by a long history of capital accumulation potentially at the expense of other parts of the world.”

Who are the volunteers at Speedwell?

The volunteer Mayflower Makers are supporting Mayflower 400 events and projects throughout the anniversary commemorations.

They have been speaking to people visiting Speedwell, talking to them about how they interpret it and how they react to the installation.

Neil Minion, Mayflower Makers co-ordinator, says: “I think that having the Speedwell installation here in Plymouth during Black History Month is just a fantastic opportunity for people to be able to have conversations and explore the thoughts and the ideas.

“Being able to do that with volunteers is a bonus because they are impartial and able to listen to people and have that conversation.” 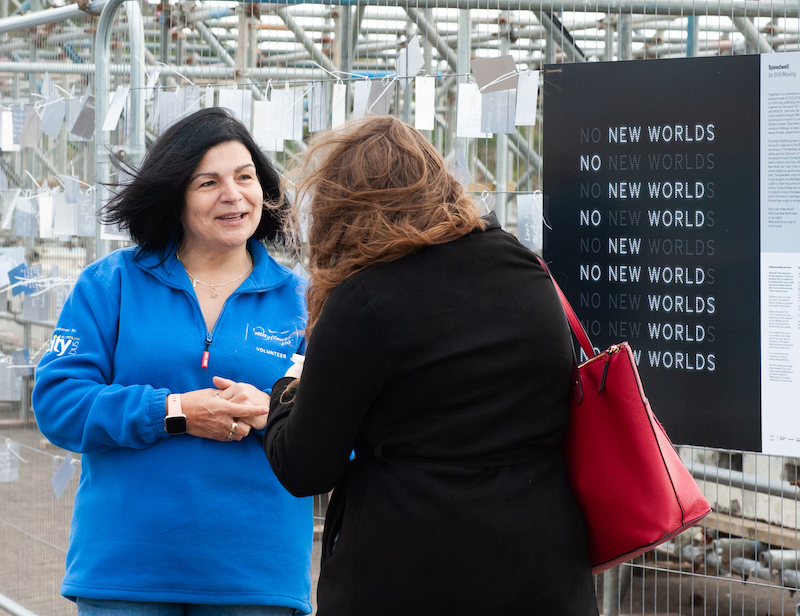 Sue, one of the Mayflower Makers, reveals: “The conversations have been really, really positive. A lot of people literally approach us and say, ‘What does this mean?’

“To me personally, as a lover of history, initially Speedwell is about the journey of the Mayflower and the fact that they were looking for a new world.

“But they were already descending on a world that had belonged to someone else for over 12,000 years, and the impact that it had on the indigenous population was devastating in the long run.

“So, from an historical context, that’s my interest but, as a mother and a grandmother, I also take on the fact that we’ve only got one world and we need to look after it for our children, my children, my grandchildren, and all the generations to come after them.” 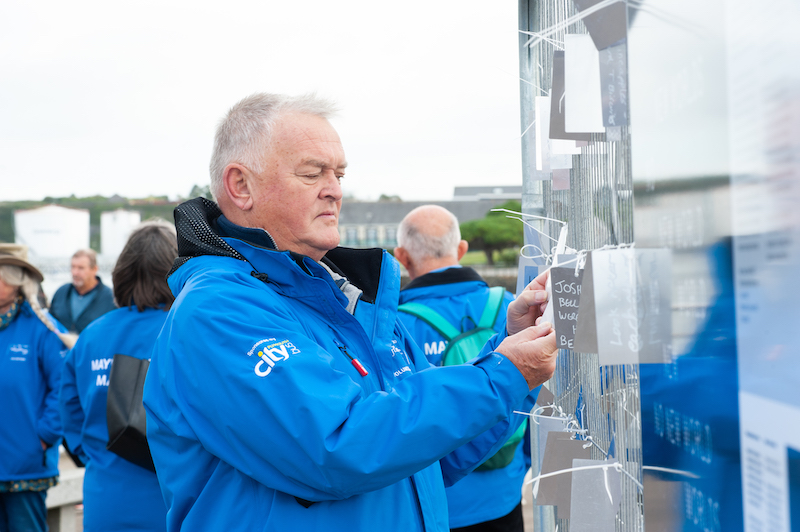 Ian, another Mayflower Maker, adds: “If you make a judgement immediately on seeing it, you’re not too likely to make the right one, I wouldn’t have thought.

“So that’s why we’re here, to try and expedite the connection between the artwork and what the artists would like the individuals to think about.

“Some people immediately go onto the ecological aspect. I’m keener on the colonial questions and the rejigging that’s happened in recent times.”

How long will Speedwell be in place? 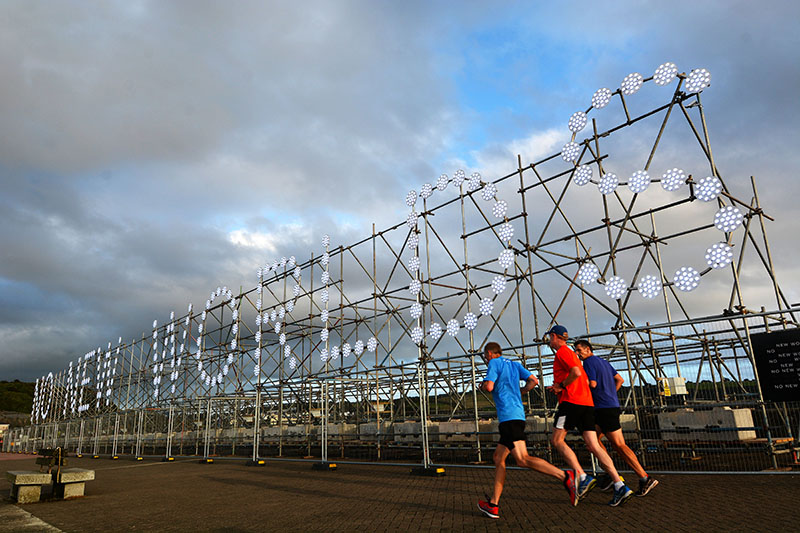 Martin Hampton explains: “After Thanksgiving, which is also the day of mourning, the sculpture is going to be switched off and dismantled.

“At the moment we are working on looking to tour is around the country and around the world at other sites where its message might have some impact.”